JLH sends the saga of Miz Hillary in verse form. One can only hope that the shade of Oliver Wendell Holmes Sr. (father of the Supreme Court justice) is not overly agitated tonight… 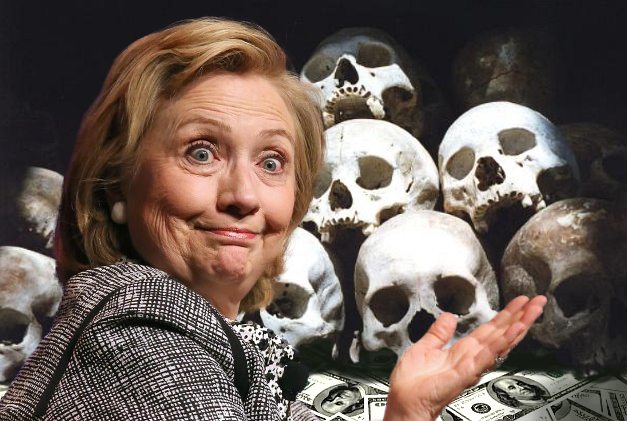 Ay, tear her tatty logo down!
Too long has it made us sigh,
And many a face has had to frown
At what “justice” let go by.
Vince Foster, Seth Rich and others, too —
What is it they may have seen:
Travelgate, Filegate, Whitewater all true,
In the service of the Queen?

Erupting bimbos, Tammy Wynette,
The little woman wasn’t pleased.
Hillary Care was not a good bet.
Nuclear secrets for the Chinese,
And who knew pork bellies could be so swell,
If their futures were bright enough?
And who knew the Russians would pay so well
For that radioactive stuff?

Now, a former first lady has little to do,
When hubby’s not home at night,
Unless public office comes into view…
Get that carpetbag packed up tight!
So she walks the Senate like one who belongs,
And fades right into the crowd:
How to look brave while going along,
And skim off whatever’s allowed.

When Bill said “Two for the price of one”
No one could have guessed the price.
This inexorable couple is just never done.
They are back like undaunted lice.
The only way to stop this first woman’s run:
A black man’s program of hope.
As Highlander says, “There can be only one”
And Hillary runs out of rope.

But all is not lost — to the victor come the spoiled.
Run the Department of State?
So what if you’re looking a little bit soiled —
After Kerry, who needs to be great?
First, our uranium buddies of old
Need a friendly re-start.
The wording is wrong, so we are told —
Google Translate’s not worth a… damn.

Her greatest achievement was Ghadaffi’s demise.
Some minor Americans died too.
Parents, wives and children apprised:
There was nothing we could do.
We came, we saw, we made a mess.
Move on; there’s nothing to see.
“What difference now if I should confess —
I’d get off on a guilty plea.”

This time is different, there is no Barack.
We all know that now it’s my turn
No one has the guts to mount an attack…
But I think I “Feel the Bern,”
Doesn’t he know everyone has been paid?
Why is he still around?
This is not how the game is played.
I’ll pound him into the ground.

So what if I fixed some things here and there?
He can whimper all he wants.
So what if he doesn’t think it’s been fair?
Who asked him to leave Vermont?
And now I am off to the race of my life,
And I’m running against a clown!
Dirt and rumor against him are rife,
He’ll likely be run out of town.

Hey! Why am I not way ahead right now!?
Where are these polls coming from?
Who are they talking to, anyhow:
Deplorables, reactionaries, dumb!
I KNEW it — that damned electoral thing —
Now it’s gone and cost me the race!
Who cares what tune the “flyovers” sing?
They’re a colossal waste of space!

I will not be Trumped by that arrogant jerk,
But my hands are not lily-white…
Oops, I mean: Now y’all gots to git to work,
‘cause we gots us a rilly tough fight…
Ze basket of deplorable sink zey have won over us;
We’ll show zem “Si, se puede, señor”…
And we are woman, just hear us cuss!…
And we are gayer than ever before!

With all the minorities on our side,
And the hidden anti-American few,
We can hide whatever we want to hide,
And paint the picture brand-new.
Leftover Justice, intelligence, IRS —
Bespoke in the upper ranks —
Will dredge their imagination’s cess
And sink the Steele in his flank.

And while he is muelling the likely result,
Impeachment will rise like a tide.
He’ll be washed away, as millions exult
And come back to my righteous side.
How gracious I’ll be as they send him to jail
With all of his progeneration!
In a few years, when Pence proves politically frail,
I’ll be back as the head of the nation.

Alas! The ending was re-revised;
The Mueller’s Tale was light.
Oh, better that her shattered lies
Should sink fore’er from sight
Into the swampy DC muck,
Where predators compete,
And the eagles of the law shall pluck
The harpy of deceit.