The blatant difference between the media coverage of the Easter bombings in Sri Lanka and that given the Christchurch massacre illustrates what everybody already knows: the media and the political elite love Muslims and hate Christians — I mean, Easter worshippers. We’re not supposed to use the “C” word in public anymore.

But that’s not news. It’s a dog-bites-man story, so I won’t waste any more virtual ink on it. Instead I’d like to talk about a more subtle media preference that was revealed this past week in the differing coverage given to two attacks on religious minority groups.

The first was Tuesday’s vehicular attack on a group of pedestrians in the California town of Sunnyvale by a man named Isaiah Joel Peoples. Eight people were wounded in the attack, one of them grievously.

Mr. Peoples is a retired soldier and a veteran of the Afghan war. His mother told the press that he had been discharged early due to his PTSD, which was the only possible explanation for his actions. But Sunnyvale police say the suspect targeted his victims deliberately because he thought they were Muslims. A witness heard him saying “Thank you, Jesus, thank you Jesus” as he got out of his car.

The second attack occurred yesterday. A man named John Earnest entered the Chabad of Poway synagogue near San Diego and opened fire on the congregation, killing one person and wounding at least three others. The shooter was eventually apprehended by police.

Mr. Earnest is allegedly a Jew-hater who regards Donald Trump as a Zionist tool and a traitor to his race. He has posted anti-Jewish materials online, and even has a manifesto (I haven’t attempted to read it yet).

The second story received the kind of media coverage that you would expect, given that it was a deadly attack on a synagogue by a “white supremacist”. Yet the coverage of the first story, despite its anti-Muslim angle, was more muted.

Muslims and Jews are generally held in equal esteem as victims by the media. Given current political and demographic trends, Muslims may well surge past Jews* and become the preferred victim group. But for the moment the two are roughly equal.

I couldn’t understand why the Sunnyvale Islamophobe didn’t rate top headlines on every media outlet. Not only is he an American veteran who deliberately tried to kill Muslims, he’s a Easter worshipper — that is, the media finally have a Christian terrorist to point to, something they’ve been slavering for ever since 9-11.

So why aren’t the talking heads screaming about the incident? Why aren’t the spokescreatures for CAIR being given top billing on every news program to bewail the growth of Islamophobia in this country?

And then I saw the mug shot of Isaiah Peoples, and I understood why: he’s black.

Isaiah Joel Peoples doesn’t fit the Narrative. Yes, he’s an Easter-worshipper, but he can’t possibly be a white supremacist. Covering the story in detail would give the news anchors heartburn, so they’ve mostly ignored it.

If CAIR is shouting about the incident, they’re not getting any media attention. Vlad suggests that their apparent lack of outrage is a deliberate, pragmatic strategy, designed to avoid causing tensions in their alliance with the African-American community.

In any case, the Sunnyvale attack is in the process of being buried, while the Poway synagogue shooting is still major news.

* Dymphna is of the opinion that the pendulum has already swung: Muslims are preferred by the media, while Jews are deprecated.

As evidence she cites this cartoon of Benjamin Netanyahu and Donald Trump that was published in the international edition of The New York Times, the overseas outreach division of “America’s newspaper of record”: 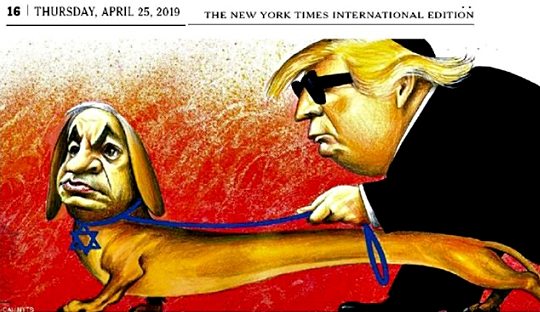 Placing the yarmulke on Mr. Trump’s head puts the cartoon firmly in the camp of Jew-hatred. It’s worthy of Der Stürmer — except that it’s far more sophisticated than any cartoon the Nazis ever produced.

Jew-hatred is definitely on the rise in the Democrat Party. Which makes sense, given the anointing of Ilhan Omar as a representative of the party’s future (along with another ill-informed youngster, Alexandria Ocasio-Cortez).

Dymphna believes that the NYT’s peddling of the trope is a sign that Muslims have replaced Jews as America’s Preferred Victim Group.