April is the cruellest month in Modern Multicultural Britain, where the people cannot be allowed to have Brexit, no matter how many of them vote for it. Here’s the latest from Seneca III. 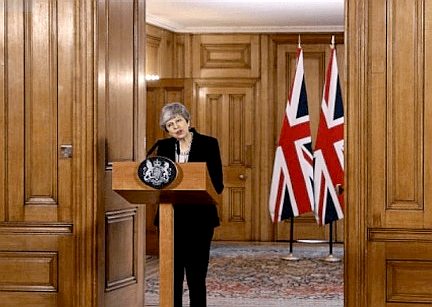 The End Days of Lies and Treason

Theresa Mary May, First Lord of the Treasury, Prime Minister of Great Britain and Northern Ireland and the EU’s Manchurian Candidate in the UK, has spoken from Downing Street to the nation she has been ordered to betray.

I have just come from chairing seven hours of cabinet meetings focused on finding a route out of the current impasse. One that will deliver the Brexit the British people voted for and allow us to move on and begin bringing our divided country back together.

I know there are some who are so fed up with delay and endless arguments that they would like to leave with no deal next week. I’ve always been clear that we could make a success of no deal in the long term, but leaving with a deal is the best solution.

So we will need a further extension of article 50, one that is as short as possible, and one that will end when we pass a deal.

And we need to be clear about what such an extension is for, to ensure we leave in a timely and orderly way. This debate, this division cannot drag on much longer. It is putting members of parliament and everyone else under enormous pressure, and it is doing damage to our politics.

Despite the best efforts of MPs, the process that the House of Commons has tried to lead has not come up with an answer. So today I am taking action to break the logjam. I am offering to sit down with the leader of the opposition and to try to agree a plan that we would both stick to, to ensure we leave the European Union and we do so with a deal.

Any plan would have to agree the current withdrawal agreement. It has already been negotiated with the 27 other members, and the EU has repeatedly said that it cannot and will not be reopened.

What we need to focus on is out future relationship with the EU. The ideal outcome of this process would be to agree an approach on a future relationship which delivers on the result of the referendum, that both the leader of the opposition and I could put to the House for approval, and that I could then take to next week’s European Council.

However, if we cannot agree on a single unified approach, then we would instead agree to a number of options for the future relationship which we could put to the house in a series of votes to determine which course to pursue.

Crucially, the government stands ready to stand by the decision of the house. But to make this process work, the opposition would need to agree to this too.

The government would then bring forth the withdrawal agreement bill. We would want to agree a timetable for this bill to ensure it is passed before the 27th of May, so that the United Kingdom need not take part in European Parliamentary elections.

This is a difficult time for everyone, passions are running high on all sides of the argument. But we can and must find the compromises that will deliver what the British people voted for.

This is a decisive moment in the story of these Islands. And it requires national unity to deliver the national interest.

National unity!? I’ve been closely watching her and the rest of that that venal rabble in Cesspit-on-Thames these last few weeks with an overwhelming sense of morbid fascination, and I have concluded that her cuckolded squeaky toy currently desecrating the Speaker’s chair (John Bercow) is not a renegade interloper at all, but a perfect representation of what the Mother of Parliaments has become. And together the last thing they are interested in is unity. 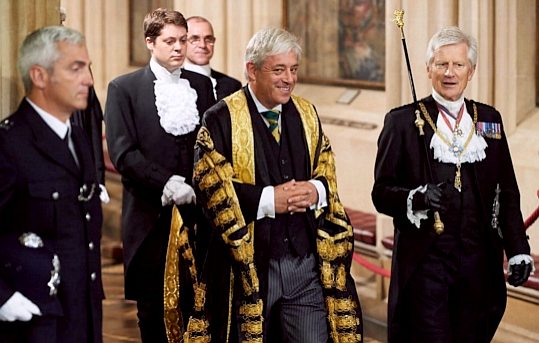 One of the best, most patriotic Prime Ministers this country has known, Margaret Thatcher, was a woman. The worst Prime Minister this country has ever known (even worse than Lord North, who at least had a few good points in his favour), one Theresa Mary May, is also thought to be a woman although the jury is still out on that one.

Nothing or no one could be more fitting to this time and that place than that pair, indeed May and Bercow could well become known as the Benedict Arnold and Vidkun Quisling of our time — or simply just two EU sock puppets. Plus ça change and, yes, conspiracy is everywhere; note this following gem.

This headline from The Daily Mail online today, April 2 2019:

‘Project Fear’ on steroids or a warning as to what a defeated Remainer Class are going to do if they fail, deliberately bringing poverty and strife down on us to prove their point, forgetting that they’ve had nigh on three bloody years to prepare but have not done so because they never intended to let us leave in the first place?

Whatever. It was still a piss-poor effort at scaremongering. I’m disappointed that this plonker didn’t go the whole hog and threaten a plague of locusts, a plague of frogs (discounting Jupiter and his scurvy crew just across the Channel), the Thames running red (probably not — too Enoch Powellish, that one), another great flood or, courtesy of The Daily Express a rogue asteroid directed to Earth by Leavers to hit Londonistan and wipe out all intelligent life (a very low death toll that would be, and Saint Markle would most certainly survive). Obviously, nothing improves in the complicit MSM either.

— Seneca III, with God knows how many days are left before we descend into Armageddon, this 2nd day of April 2019.

10 thoughts on “The End Days of Lies and Treason”