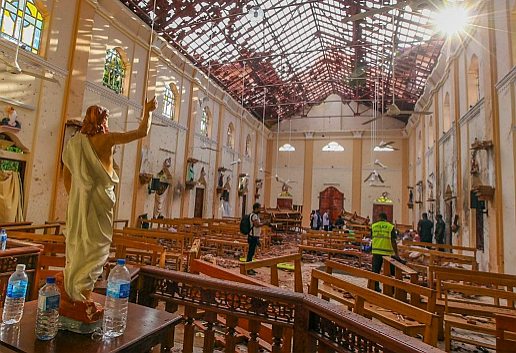 Just before I went to church this morning I saw the news reports about the Islamic terror attacks in Sri Lanka. I didn’t have time to put together a post, but I recommend the reports at Vlad Tepes, which include dozens of videos (although at least two of them have been taken down by YouTube since Vlad posted them).

There were eight separate bombing attacks, four of them against churches celebrating Easter Mass. 207 people were reportedly killed, and at least 450 others wounded. The perpetrators are allegedly members of a new Islamic terrorist organization. Seven people have been arrested so far, but some of the explosions were caused by suicide bombers who will never be brought to justice on this side of the veil.

Alternatively, you can read about what happened in The Guardian or The Washington Post.

Vlad also has a report on an unrelated attack on a Croatian church in Munich. A bearded culture-enricher entered the Easter service, shouted “Allahu Akhbar”, and detonated several powerful fireworks. The congregation fled in panic, and 24 people were injured in the melee.

8 thoughts on “Carnage in Sri Lanka and Panic in Munich”