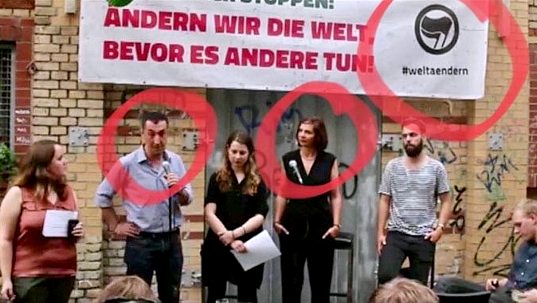 The following video shows excerpts from a Green Youth rally in Germany in the summer of 2017, not long before the September elections. Two Green Party leaders, Cem Ozdemir and Katrin Goering-Eckardt, were in attendance. Their faces are circled in the screen-cap above. Also circled is a logo with the Antifa (“anti-fascist”) flag — the event was obviously a joint enterprise for the Green Party and the Antifa groups.

Listening to these people speak, it’s quite clear that “climate” is very much a postmodern religion. They speak with at least as much self-righteous zeal as the most fervent evangelical preacher.

And it’s not just that they’re true believers, but also that they’re earnestly convinced that they know best for everyone; that they must force everybody else to do or not do certain things. Implicit in that belief is the demand that if others can’t easily be made to do what their climate religion requires, then stern muscular well-armed men must be delegated the job of MAKING them obey. And if that fails, well, the stubborn unbelievers will just be quietly eliminated from society, for the good of us all.

MissPiggy, who translated the video for subtitles, notes which parts she left out when she made the excerpts:

I cut out all the other stuff they want: free contraception, legalized pot, and what the younger ones said about the police. Then Cem Ozdemir had to retort about how the police are actually good (damage control).

22 thoughts on “The Green-Antifa Synergy”