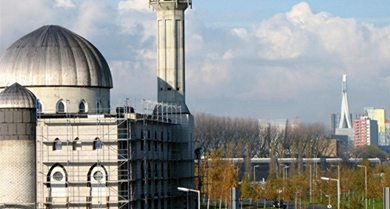 FouseSquawk has translated two articles about today’s terror bust in Rotterdam. See his blog for the full story.

The first article is from the Dagblad van het Noorden:

The police arrested five terrorism suspects on Saturday. In the morning, four were arrested in Rotterdam. A fifth during the day. Where (exactly) the arrests were made has not been reported.

They are suspected of involvement in the preparation of a terrorist crime. Immediately after the arrests in the morning, the locations where the detentions were made were searched. Four of the arrested men are between 20 and 30 years old and come from non-Western countries. Nothing further is known about the fifth.

The investigation will continue in the coming days, the police reported. “The emphasis is on further research into the nature and scale of the terrorist threat.” The police cannot say anything else.

In June two men were arrested in Rotterdam on suspicion of preparing terrorism and membership of a terrorist organization. It is believed they wanted to attack the security services in the Netherlands.

In September seven men were arrested who, according to the Public Prosecution, wanted to commit a major terrorist attack on an unnamed event. Two of these men come from Rotterdam and one from Vlaardingen.

The second article is from De Telegraaf:

Arrested female terror suspect: ‘I know nothing about it’

ROTTERDAM — The young woman, one of the four terrorist suspects arrested in the Rotterdam region, opens the door that was broken early Saturday morning but has already been repaired.

She has a son on her arm. Her little daughter beckons with a smile that the reporter must come in. A friend with baby is also in the flat. In the corner is a Christmas tree with flickering red lights.

They hardly speak any Dutch. According to neighbors, it is Syrian refugees who came to live on the 5th floor in a fifteen-story apartment in the Rotterdam Ommoord-Prins Alexander suburb a year ago.

The fear and despair can be read in the eyes of the mother. “We were all asleep this morning when suddenly police rushed in with a lot of banging. My husband was pulled out of bed and taken away. I do not know why,” she says via an interpreter on the phone. She does not want to say where they come from.

According to a neighbor, the man works as a mechanic in a car garage in the neighborhood. “Pretty scary that this happens so close by. I hope that no explosives are found. Soon our gallery will explode here. No, we did not have real contact with that family.”

A Dutch neighbor in the multiculti flat has seen it all tonight. She knows it well: “A terrorist has been carried away with a bag over his head. As many as twenty heavily armed officers came into their flat and I heard a lot of shouting and screaming.”

One thought on “Five Mujahideen Rounded up in Rotterdam”