The following article about the new migration wave passing through the Balkans did not appear online, but only in the print edition of Kronen Zeitung (Krone Bunt supplement) on September 30, 2018.

Many thanks to MissPiggy for the translation:

The recent arrivals have in part increased more than a tenfold. This time the largest group of migrants comes from Pakistan. ORF Balkans expert Christian Wehrschütz was on site for a local investigation.

Another Stampede Through the Balkans

Both the small town of Velika Kladuša and the town of Bihać [both in Bosnia-Herzegovina] are still hot spots on the Balkan route, as these municipalities lie near the border with Croatia, and about 100 km [63 miles] from Slovenia. On the outskirts of Velika Kladuša there are emergency tents set up on bare earth, and “inhabited” by about 250 people. Meals are provided by the Red Cross, which is funded by the International Organization for Migration (IOM). The IOM has sufficient means to set up a winterproof reception center, but lacks a location and governmental authorisation. However, the IOM has rented a hotel to better accommodate families arriving there. The journey continues with the help of smugglers and mobile phone navigation systems, moving on towards Italy and other EU countries.

In general, the burden placed on the states of former Yugoslavia by the new Balkan route from Greece via Albania and Montenegro to Bosnia and Herzegovina remains considerable. For example, Bosnia alone registered around 12,000 migrants in the first seven months of this year, ten times more than the year before.

Visa liberalisation acts as a magnet for illegal migration

The largest group by far comes from Pakistan. According to the border police in Ljubljana, 6,000 illegal border crossing were thwarted by mid-September. This is a significant increase over the same period from the previous year, of only 1,200 illegal border crossings. Slovenia has documented around 1,000 illegal border crossings per month since May of migrants coming from Croatia. All this despite 6,000 border control officers’ being deployed to protect the 1,200 kilometres of external borders of the European Union. One third of the illegal border-crossing migrants in Slovenia are Pakistani. The 400 Iranians who were also caught crossing the border illegally are most likely a consequence of the visa liberalisation agreement that Serbia made with Iran last year.

In general, visa liberalisation is a magnet for illegal migration — not only in Serbia, but also in Bosnia and Herzegovina (via Turkey) and in other countries. The border control officers of the EU border protection agency Frontex are already present at the airport in Belgrade. Frontex is also stationed at the airport in Tirana, in order to make illegal migration from Albania into the EU more difficult. Frontex and Albania will sign a status agreement in early October. As a result, Frontex will be given executive powers in this Balkan state and will no longer be merely observing and advising. Such agreements were also signed with Macedonia and Serbia. Currently Frontex has 124 officers in the Western Balkans deployed at so-called coordination points.

The Balkans is also a focal point of Austrian police cooperation with sixty officials who are working with thermal imaging cameras at various borders. A support team was also present at the Albanian-Greek border during the summer. There, a special vehicle was used that can read mobile phone data to determine the nationality of migrants, routes, and as cash flows to human traffickers. To receive payment for their services, human trafficking organisations use virtual currencies as well as the so-called hawala system. Money is deposited by someone and a code agreed upon. If a trafficked person reaches a certain part of the route, or if a trafficker fulfils part of his task (forging documents, providing transport), the code is transmitted and the money is transferred. Such codes are also sent via mobile phones, which can be detected. Human traffickers also use apps that indicate shipping traffic on the North African coast. The rescue ships of aid organisations have become “part of the business model of smugglers” in a sense, because the “dilapidated dinghies” are deployed when such a ship is nearby.

In Vienna, a task force is already working with investigators from across the Western Balkans to combat illegal migration. In this team are specialists who speak African languages as well as Urdu, Farsi and Pashto in order to evaluate intercepted telephone conversations.

As far as the migration routes are concerned, there is no uniform picture of the entire situation. For example, along the Mediterranean route the migration flows from Libya to Italy have fallen sharply due to the traffickers’ immediate response to political changes in the destination countries. On the other hand, the migration flow across the maritime border from Turkey to Greece is growing. It is particularly strong at the land border between Turkey and Greece, where the EU-Turkey Return Agreement does not apply. In Austria, current figures equal those between the years 2013 and 2014. One thing is clear: despite all measures to protect the border, migratory pressure from Africa will continue for a very long time. According to the United Nations, the population in Africa will double in the next 30 years! The stabilisation of the situation there must therefore be the primary objective of the EU. The failed aid development programs of the ’70s should serve as a powerful warning. 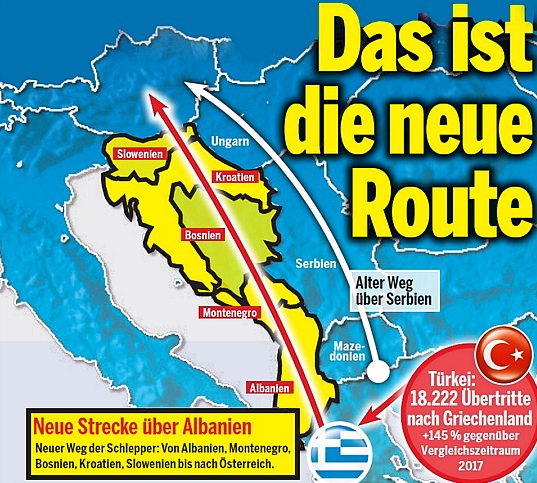 9 thoughts on “Another Stampede Through the Balkans”