In his latest essay El Inglés makes a few observations about the brawl that broke out in the New Red Apple Nail Salon in Brooklyn earlier this week.

In addition to the cell phone video embedded below, see this video news report, or this commentary by an African American. 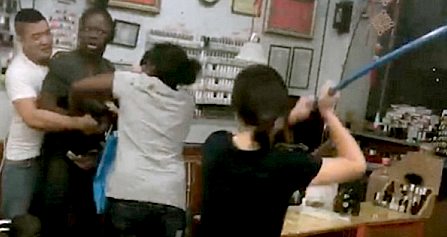 A Missive from Post-America

All honest white people will acknowledge that there is one area in which they harbour a deep insecurity with respect to Asians. By Asians, we refer here not to the denizens of the Indian subcontinent, whose true racial nature is unclear, and best captured with the decidedly untechnical term ‘brown.’ Rather, we refer to proper, epicanthically-enriched, chopstick-and-bamboo Asians, whose devastating abilities in the arts of hand-to-hand combat have long wowed film audiences around the world. They may be small and weedy-looking, but goodness me, they know how to fight, goes the refrain. Jet Li. Jackie Chan. Bruce Lee. You wouldn’t want to tangle with that lot, would you?

This concern about the combat superiority of the Asian has finally been dispelled thanks to a brief video made available online in recent days. Said video was captured on the cell phone of a witness to the brawl itself, which occurred in a nail salon in Brooklyn, Noo Yark. This fascinating anthropological resource shows a group of largely indeterminate, though substantially Chinesey-looking, female Asians going at it with a pair of angry, female, negro flailers straight out of central casting. And it sets the record straight as to the combat abilities of the Asian: Reader, they fight as badly as everyone else.

They shove. They flail. They stagger. They swipe. They hit people with brooms. Admittedly, said Asians are fairly elderly, and an injection of younger blood might allow us to witness, in future bouts, the occasional Crouching Tiger Hidden Dragon-type moment. But, in a nutshell, they fight in the same raggedy-a**ed way that people always do in the real world. Jackie Chan, you lied to us!

The conflict itself was most peculiar. All informed people know that the absence of white people is supposed to result in a situation of post-racial harmony, as People of Colour display the profound love they hold for each other. Black, brown, yellow, blacky-brown, browny-black, yellowy-brown, blacky-yellowy-brown: colour matters not. POC move in. White people move out. Racial harmony ensues. So goes the theory.

And so much for theory. The reality seems to be rather different. POC move in. White people move out. POC start eating each others’ faces. White people move back in with riot gear to minimize casualties. The post-racial utopia is put on hold. Agitated negros cluster outside the immigrant establishments providing journalists with detailed descriptions of what their black a**es (their expression, not mine) will do if things do not improve. And so the wheel turns.

Those in the know will be aware of the general trend here. American immigration policy brings large numbers of poor but aspiring people to American shores, many of them from Asia. These people choose to settle in the big coastal cities, where they open labour-intensive businesses in poor areas with substantial black populations. These areas often present certain business opportunities due to the low entrepreneurial levels of the black populations and the unpleasantness of conducting businesses amongst and for the negro underclass.

Sooner or later, mutual hostility and contempt combine with resentment at the relative economic success of the newcomers to create brawls, sidewalk protests, police intervention, and much general frothing. In extreme circumstances, POC-on-POC hostility can become quite extreme. Interested parties are invited to investigate how much fun was had by the Korean population of LA during the LA Riots of 1992.

Speaking of Koreans, this development comes but a couple of weeks or so after another Asian incident in the United States. One Sarah Jeong, an American of South Korean extraction, had been awarded a prominent position on the editorial board of The New York Times for her apparent excellence in tech journalism. Before long, it transpired that she had previously made a great many unflattering remarks about white people on Twitter, including, but not limited to, the wonderful sentence fragment ‘dumb**s f***ing white people marking up the internet with their opinions like dogs p***ing on fire hydrants.’ She defended herself on the grounds that she was engaging in ‘satire’ and ‘counter-trolling.’

Of course, I sympathize with her basic position. I have often made cunning satirical reference to Koreans as a bunch of dog-eating, slant-eyed, kimchi-munching no-hopers, only to then be vilified as a racist. It is all most troubling. Satire is simply beyond most people these days. Being a sophisticated analyst of racial affairs opens one up to such unfair attacks, and the mob is relentless.

Despite the best efforts of the alt-right agitators on Twitter, it appears that Sarah Jeong will be keeping her job at The Times. Much discussion has centered on this development, most of it largely predictable in the arguments it presents. She’s a racist. No, you’re the racists, racists. No, she’s a racist. No, you are.

And in the background, post-America swirls into view.

Post-America is that space in the geographical United States where POC have swept or are sweeping in to replace the knuckle-dragging white racists, resulting in post-racial utopia or multi-racial dystopia, depending on your point of view. To this writer, it sounds very much like the latter.

We will continue to consider developments in post-America as and when appropriate source material presents itself. For now, we would simply present the following pieces of advice to our white friends and colleagues living in America, but in proximity to post-America:

Stay safe out there, WAYCISTS.

35 thoughts on “A Missive from Post-America”