Our Swedish correspondent Svenne Tvaerskaegg sends the latest news from the southern Swedish city of Malmö, which is in the midst of a wave of violence brought on by a culture-enriching gang war. 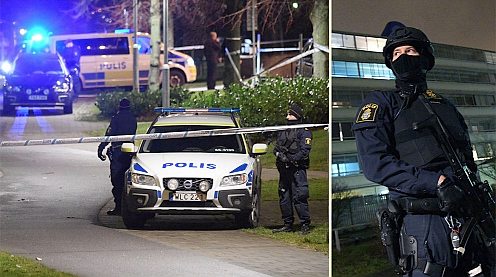 Gang war rages on the streets of Malmö

Malmö, Sweden’s third largest city and home to the infamous ghettos of Rosengård and Seved, which are rated by police as two of the worst and most crime ridden ghettos in Sweden, is facing a complete breakdown of law and order. Warfare between rival immigrant gangs is being waged openly on the streets of the city, and last week was one of the bloodiest in Malmö’s history of violent gang crime. On Monday evening a group of people standing outside an internet cafe were sprayed with machine gun fire in a drive-by shooting that killed three men and wounded three more. Police believe one of the men killed, a known and high-profile gang member, was the intended target while the others killed and wounded, also with heavy involvement in gang criminality, were collateral damage. On Thursday evening another gangster was gunned down in central Malmö in what police believe was a revenge killing for the internet cafe attack.[1]

Malmö stands on the Swedish side of the Öresund bridge, which connects Malmö to Copenhagen and is a major thoroughfare to the continent of Europe. Control of the multi-million-kronor drug traffic from Europe to Sweden is thought to be a major factor behind the gang warfare.

Police are worried that the gang warfare in Malmö is in the process of escalating to new levels of violence. Sources in the criminal underworld warn that “hell is about to break loose”[2], while the police, overwhelmed and undermanned, are ill-equipped to uphold law and order. Police say they need at least ten times the present number of officers if they are to have any hope of containing the immigrant gangs, an impossible figure, given that their number is actually decreasing as officers leave the service for safer and less demanding jobs.[3]

In a desperate attempt to stop the escalating violence, Malmö’s besieged police are about to launch a radical new crime-fighting strategy. They are going to make an appeal to the gang members’ better nature and politely ask them to “calm down” and end their war. The new strategy carries with it both a carrot and a stick. Police have promised the social services will be on hand to offer help to gang members who want to leave their life of crime, while those who choose to continue their criminal careers will face “further measures”. The police do not specify what those “further measures” might be, but considering the police have already exhausted all their resources, specifying any “further measures” might be as impossible a task as fighting the gangs.[4]

For their part the immigrant gangs have made it clear to the police where they stand. Police stations have been subjected to hand grenade and machine gun attacks, and earlier this year a large bomb exploded outside the police station near the Rosengård ghetto. The explosion, which blew out the entrance of the station and damaged parked police cars, was heard all over Malmö.[5] Local police have requested that the Rosengård ghetto station be moved to a safer location while police stations across Malmö have been put under round the clock guard by heavily armed police.[6]

The Öresund bridge was intended to open up Malmö to the continent and turn it into a cosmopolitan city, multicultural and vibrant. The proximity to Copenhagen lead to many Danes moving to live in Malmö while others took advantage of the short commuting time to work there, but now the escalating crime is causing the Danes of Malmö to abandon the city and escape back across the bridge to the safety of Denmark.[7]

Malmö is now too dangerous a place and instead of being a highway to the world outside the Öresund bridge has become a conduit for guns, drugs and a never ending stream of immigrants heading for the crime infested ghettos of Sweden.

24 thoughts on “Gang War Rages on the Streets of Malmö”