Update on the aspiring young dental student, translated by Egri Nök from the Abendzeitung:

The Eritrean “refugee” “declared that he was angry, because he wasn’t allowed to bring his whiskey into the accommodation. As a result of this anger, he attacked the car, which he had erroneously mistaken for a police car.”

“It remains unclear how the man, who had been living in Germany for three years, and who was already notorious with the police for violent offenses, could have confused a police car and an emergency doctor’s car. […] Apparently, not a word of apology was said during the interrogation.”

Surely this “youth” was one of those hundreds of thousands of Middle Eastern professionals invited in by Chancellor Merkel to enrich German culture…? 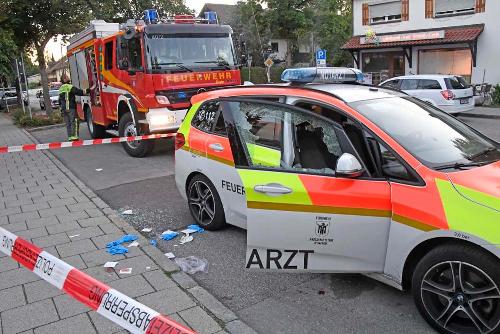 An original translation from Abendzeitung, Munich:

According to early information from police at the scene, two unaccompanied underage refugees riot in Ottobrunn (suburb of Munich — translator). With a full whiskey bottle, one of the two smashes in the side window of an emergency doctor’s car and wounds the emergency doctor.

According to early information from the police, one of the two smashed in the side window of the car with a full whiskey bottle and struck the emergency doctor right in the face. The woman lost consciousness and lost several teeth. Then, the youth threw the bottle at the doctor’s driver, who suffered injuries as well.

The obviously drunk duo — who had apparently been rioting just before — fled, but were apprehended and overpowered by police a few hundred meters away. Allegedly, during this measure, several residents of Ottobrunn attacked the officers to help the alleged perpetrators, who were then taken to preliminary detention.

Two youths (17 and 20), who are unaccompanied refugees, wanted to enter the Ottobrunn youth club with a trolley filled with alcoholic drinks after 8pm. When one of the caretakers pointed out the alcohol ban, and called a colleague for help, the two drunk teenagers attacked the women, and then left the building.

At the same time, the Ottobrunn fire brigade arrived at the nearby Hanns-Seidel-Haus, the old people’s home, to help a person with a life-threatening condition. After the fire brigade had already entered the building, the emergency vehicle from the Neuperlach hospital arrived. At that moment the 20-year-old attacked the car, and, from a distance of about 1.5 meters, threw a full whiskey bottle into the side window of the passenger seat. It smashed the window, hit the emergency doctor in the face, who was sitting in the car, and knocked out several of her teeth. She suffered a fractured jaw, a concussion, and lacerations in her face. The paramedic who was driving the car just suffered cut wounds from the glass splinters.

18 thoughts on “Aspiring Immigrant Dentist Does His Practicum in Munich”