As we posted earlier this month, Beatrix von Storch, the Deputy Leader of the AfD (Alternative für Deutschland, Alternative for Germany), made the a video in response to an incident at an asylum facility in the southern German town of Ellwangen, where a couple of hundred African migrants attacked the police when the latter attempted to deport a Togolese asylum seeker. The police were forced to flee, and it wasn’t until a couple of days later that the authorities returned with overwhelming force and successfully rousted the troublesome culture-enricher.

Oz-Rita, who translated and subtitled the von Storch video, has posted a follow-up as part of a piece called “The Congo Rules the Rhein”. It includes a translation of an article about Ellwangen that Dr. Alice Weidel, the co-leader of the AfD, posted on her Facebook page: 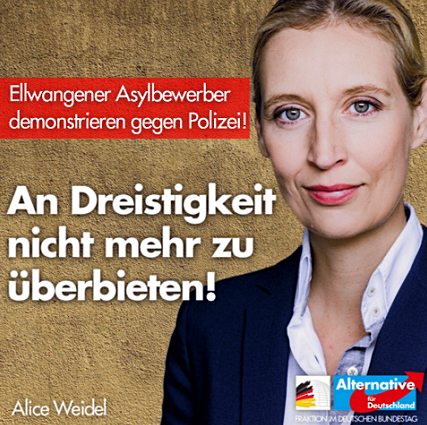 Asylum seekers from Ellwangen
demonstrate against the police!
The height of insolence!

That knocks the bottom out of the barrel: In Ellwangen, so-called refugees from Africa demonstrated yesterday against the police operation last week. On May 3, 200 residents of the same asylum shelter charged patrolmen and so blackmailed the release of a Togolese man who had to leave the country. Meanwhile it became known that he could easily return to Germany after his deportation to Italy.

The audacity with which asylum seekers can now act is hard to believe. There is no sense of wrongdoing, instead there is the impertinence to demonstrate against the police after the latter have been violently attacked.

To make matters worse, the Togolese, who provoked the riots against the police, may after his eventual deportation to Italy reenter the country. Italy as the first country that the African entered illegally is also responsible for his deportation.

It is not acceptable for criminals to exploit the system of open borders while the rule of law seems helpless. An asylum seeker who violates the applicable law in a Schengen state must be deported to his or her home country.

3 thoughts on “Congo on the Rhine”