This article is a follow-up on our report from last summer about the Syrian hairdresser in a small German town who gave his boss an unexpected razor cut. It turns out that Mohammad had been, ahem, practicing more than his hairdressing skills on his boss — prior to his performing amateur surgery on her.

If the attack on the salon owner hadn’t been so horrific, this would be quite funny, but as it is… Well, I guess I’m old and cynical now, but I still find it funny. 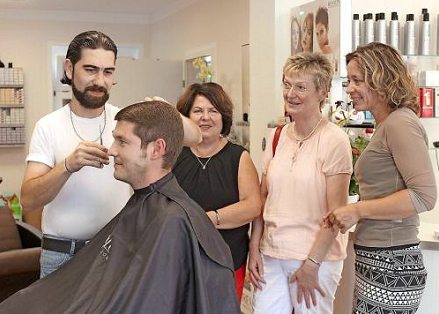 Ilona Fugmann (m.), the chief of the local job center (l.), and two integration helpers (r.) show their model refugee to the press.

Syrian Hairdresser Who Was Touted as Model Refugee, Then Slit German Salon Owner’s Throat— Turns Out it Wasn’t His Hairdressing Skills That Got Him Hired

Do you remember this story? Mohammad will style your hair — and slit your throat.

In brief: Ilona Fugmann decided to give Mohammad, the handsome Syrian refugee, a position in her hair salon. His “skills had immediately convinced her.” The whole town was amazed, and he was touted across the nation as a role model for integration.

Then, much to everyone’s surprise, one day, he attempted to slit his boss’s throat, wounding her badly. The case is in court right now.

It turns out Mrs. Fugmann wasn’t speaking of Mohammad’s hairdressing skills. And Mohammad hadn’t accidentally come to her salon looking for a job, like she told the press last year, either. But see for yourself.

An original translation from Lausitzer Rundschau:

Cottbus/Herzberg. First witness hearing in the court case on the murder attempt by a Syrian hairdresser against his female boss.

On Thursday the first witnesses were heard at the district court in the case of the attempted murder by the Syrian hairdresser Mohammad H. of Ilona F. from Herzberg. But observers of the case were denied the opportunity to hear how the victim, the owner of a hair and cosmetics salon in the district town of Elbe Elster, described the attack with a razor blade in June 2017. The court followed the attorney’s request for a private hearing. The lawyer Claudia Napiralski pointed out in her reasoning for the request that her client suffered from constant panic attacks since the knife attack which caused slash wounds in the neck, breasts and stomach, and from post traumatic stress syndrome. She also described how Ilona F. had been subjected to “emails that aren’t pretty” since three days before Christmas when the trial started, when it became public that the defendant had admitted consuming drugs, and had had an affair with his boss, to the police. All this, said the lawyer, had the potential to harm her client.

While Ilona F. was in the courtroom, describing for more than two hours her view of the events of June 28, 2017, the day of the deed, and her relationship with the refugee Mohammad H., her husband Michael F. told the media representatives in the waiting room his version.

Together with his wife, and with the help of the refugee helper organization, in 2016, he searched for an Arab hairdresser, to offer something special to the customers of the region. He thought that he had found him in Mohammad H.

But soon it became apparent, that, in contrast to the other Syrian refugees accommodated in his apartments in Herzberg, Mohammad had no interest in learning German. “I knew that he wasn’t a good employee, but I did not want to drop him,” said Michael F. Mohammed H. only delivered good work on four of the 100 work days. “His level was that of fourth- or fifth-grade special-needs school.” Even without the attack on his wife, “I would have given him notice to quit the apartment,” said F. After one year, it looked as if the apartment had been inhabited for twelve years. He never saw the share of the rent that wasn’t paid by the welfare office.

What had, until now, been presented as a successful example of integration in Herzberg, turned out to be, according to the testimony of Ilona F.’s husband on the witness stand, the complete opposite.

On payday the Syrians took the train to Berlin, said Michael F., alluding to the purchasing of drugs. The Syrian Y., who later was heard as a witness, confirmed the abuse of drugs. He confirmed that on the day of the deed, he was smoking hashish with the defendant, who is on trial for attempted murder and grievous battery, before both left the apartment of Mohammad H. and went to Ilona F.’s cosmetics salon.

There, they smoked another joint until the future victim arrived at the upper floor of the salon. According to 22-year-old Y., he went downstairs to smoke a cigarette. Only when he heard screaming did he run upstairs. The floor was covered with blood, and Mohammad H. was holding the victim by her hair and pushing her to the ground. Y. pulled him away and downstairs. In doing so, the suspect bit him and yelled to let him go back into the house.

The witness Marlies L., who was the final customer of Ilona F. on that day, confirmed the loud cries from the upper floor, and the cry: “Help me!” On the stairs, the salon owner approached her bleeding strongly; the two Syrians were already in front of the salon. “He wanted to kill me,” Ilona F. yelled, according to the witness. Y. had saved her. Marlies L. locked the door to the outside and gave first aid, until paramedics and police arrived.

When victim Ilona F. left the courtroom after her testimonial, she said to friends: “I feel relieved.” Just what she meant by that remained behind closed doors.

Normally, I object to victim-blaming. In view of how intense the brainwashing is in Germany, it does not seem right to seek fault with a 15-year-old girl who goes out with an Afghan refugee.

But in this case, Mr. and Mrs. Fugmann were cashing in on the refugee crisis (“the other Syrian refugees accommodated in his apartments”). They hired Mohammad as a prop to virtue-signal and have a competitive edge over other salons, parading him to the press like an exotic pet, and fed the public a whole bunch of lies.

29 thoughts on “Mohammad the Cuckolding Hairdresser”