In between dodging the rockets being shot from Gaza to Sderot, our Israeli correspondent MC found the time to write this essay about the timeless lure of the totalitarian collective. 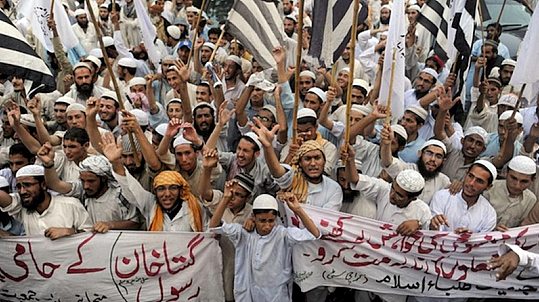 The Hive Mind
by MC

Rudyard Kipling wrote a story about the hive, and, of course there was the Borg (and it didn’t play tennis).

But just maybe we should think more about the concept of hive consciousness. Is Islam a hive mindset? Is socialism a Borg mentality controlled by the BBC/MSM and its ilk?

It is a fascinating concept: you assimilate into the hive, or you die. The Soviets did it with their gulags, the Nazis with their Concentration Camps, and Islam with its Ummah.

Yes, folks, we are fighting a Borg-like mentality, and we are the ones who don’t want to be assimilated and thus we are demonized.

One thing that has always mystified me is why Islam appears to be successful, but is not successful — it is just oil-rich. It is more comfortable for most who are born into it to be inside the Islamic hive mind than outside it. As for the new converts: a wealthy hive is not without its attractions

The socialist hive is more subtle than the Islamic hive, more nuanced and much more dangerous. The socialists have taken the Marxist ideas of class and transposed them into a layering system based on eugenics and a perverted meritocracy. In pre-WW2 socialist thought, the stock of humanity could be cleansed, subdued and perfected by brainwashing, by supervised breeding and by sterilization (or culling) of those considered unfit to join the breeding pool. The Nazis had one solution for this, and the Communists a slightly different one.

Once in the Gulag or Stalag, social Darwinism applied (read One Day In the Life of Ivan Denisovich). Life and survival was predicated on all sorts of small random events such as the size of one’s food bowl.

The despised class (or race) hierarchy becomes transformed into a hive hierarchy of the despised, the drones and the elites, where the despised are disposable slaves, the drones are part of the hive but have no individuality, and an elite whose word is law even if it is whimsical or downright wrong.

The resulting hive resonates to its own self-abnegation. It is more than a religion; it is an obsession where conformity is taken to murderous extremes. An obsession that counts mass murder as a totally acceptable tool in the hive’s arsenal of process and protection.

As the Age of Reason passes away, and the Enlightenment dims, so the emotional takes hold as the prime human need and desire. The safe space of cradle-to-grave welfare and protective encapsulation is enforced; play the game or die. The truth is too painful. It is stark and unbeautiful and uncomfortable. It means taking responsibility for one’s actions: better the make-believe of the hive mind. If everybody believes the same thing, then it must be true!

The hive used to have barbed wire fences and guard towers with searchlights and machine guns, but now it has a more effective cage, a mind-cage called visual media. We started with the movies telling us how to think, but television brought the mind-gulag into our homes, and sprayed our brains with pixilated scopolamine, imprisoning us in a controlled virtual environment. Walls? Who needs walls when electronic prisons are far more effective?

Then came mobile phones and the hive mind made a great leap forward.

The cultural Marxists specifically targeted the media, and they successfully infiltrated it. Now what was once seen as leftist propaganda has been totally absorbed into our psyche, particularly the idea that our Judeo-Christian heritage is not only of no value, but has positively damaged the ‘global’ society. The whole ‘global warming and climate change’ issue was configured to the illusion that ‘the West’ had robbed the rest of the world of its rightful share of resources and thus the white man should be made to pay it all back.

This and many other Marxist-derived memes were fed into the hive mind, along with the idea that those who resisted were somehow deranged.

The liberal-conservative right operates on a shoestring. It has few resources and those who contribute time and talents tend to do so voluntarily. But the hive, in contrast, is very well-funded indeed, so much so that it can deny a platform to any opposition. In my country of birth, England, I know that I no longer have any kind of freedom at all. My ‘rights’ are dictated by (manipulated) public opinion, and there is no longer any statute that cannot be massaged by those public servants charged with keeping people docile. The authorities in England provide a hive-friendly environment in the name of multiculturalism and diversity, where the Islamic hive is given a free rein to exploit and plot its expansion at the expense of the automatically guilty indigenous Judaeo-Christian who must pay the price for his past exploitation (‘colonialism’), supposedly on the understanding that he will not cause trouble because of the constant re-education he is subjected to.

My feeling is that the English people are seething, but the Marxist hive is moving heaven and earth to keep the lid on the pressure cooker. The whole of the British mainstream media is goose stepping to the strains of a elitist Horst-Wessel-Lied whilst selling out to the threat of terrorism. They actually believe that the Muslim hive is benign and not at all to blame, that the Muslims are the supposed victims of years of colonial oppression, and it is thus their absolute right to kill and maim whitey and take revenge on the Jew because everybody knows that it is all a Jewish plot.

This is a tangled message, with the nits combed out by the teeth of the accusation of ‘racism’ against anybody who points out that the emperor’s new clothes are somewhat skimpy.

The propaganda walls of the hive give rise to all sorts of cognitive dissonances. A relative of mine supported Brexit but did not vote because she thought that one of the leaders was a sleaze ball. It is much like a kangaroo courthouse where the (leftist) defense has only to demonstrate possible reasonable doubt but the (conservative) prosecution has to positively prove its every statement.

The hive is a literally an imprisoned audience which has its every move and thought governed by its media tormentors. As for the dissenters — we too are not immune to the hive influences. They appear regularly in the comments section here and I cannot guarantee that I am absolutely free of its honey; it is sweet and pervasive.

Like the Bereans of the Bible we should test everything. The hive mind is very powerful, and its influences are not always easy to recognise. For a modern child it starts at a tender age: father is a bumbling idiot, mother is stressed by her job, the teacher is upright and reliable and b-lie, b-lie, b-lie.

While the Internet is a wonderful tool, it is also a terribly dangerous one. Used judiciously it exposes the lies, but that is not an easy skill to acquire. To perceive the differences among fact, conspiracy theory (which often turns out to have an element of truth) and the pure out-and-out lie is hard, but to the hive mind, truth is predefined anyway, and there is simply no need to make any effort at validation. The hive is ‘truth’; it exists, therefore it is.

In the Kipling story was written at a time before education was freely available for all. In it the hive is penetrated and poisoned by mind-bending alien creatures (in our case it is a ‘conservative’ hive penetrated by Marxists). That availability of low-cost high quality education made a huge difference to Western society, and I was one of its last recipients. The government of the UK actually paid me to go to University, and the tuition was free.

However, this became very threatening. Too many free-thinkers.

Most Marxists I have met had privileged upper-middle-class backgrounds. They felt that they could justify the big house and the expensive private education only by organising the workers. When they finally discovered that the workers did not want to be organised, they switched to the immigrants etc. — anything rather than actually working for a living.

Kipling was right: the penetrated hive goes insane and dies, and the Marxists move on, happy with their destruction — Zimbabwe a mess, Venezuela a disaster, South Africa heading that way.

Next stop Europe, where the long march through the institutions has reached its apogee. Almost every government department in UK is staffed by followers of the socialist religion.

We should no longer regard political religions as separate entities from theocratic religions. Fanatics are fanatics, wherever and whatever they believe. If you are prepared to kill and maim for the cause then you are a terrorist, whether political or religious.

The Nazis settled on genocide as a political solution. Muslim fanatics want the same thing, so why do we treat them differently? The Nazis were socialists who were slightly to the right of the communists, Muslims, too, are basically socialists, but because they claim to be a theocratic ‘religion’ so everybody gets moonstruck and we have to use different words.

And we compound the problem every time we allow a jornolist to get away with the greatest hoax of the 20th century: that Nazis are from the conservative ‘right’.

The great ‘conservative’ hive so well described by Kipling has been fragmented into tiny little islands of reason, each of whom cannot agree upon reasonable behaviour because they still do not reject wholesale the smears of Nazism. And while the right accommodates the idea of Nazi ‘racism’ rather than Nazi socialism, the right will not recover.

Did the racial genocide arise out of the Nationalism or out of the Socialism?

It is very easy to put that to the test. Even if we charge the eleven million butcher’s bill of the Nazis as ‘nationalism’, it is miniscule when seen against the abattoir of the socialist slaughter…

There is nothing much wrong with Nationalism; MAGA has not yet produced any monsters. But there is a very bloody history to socialism; within the first three months of both communism and Nazism, the barbed wire, the watch towers; the camps and the political prisoners to fill them all begin to appear.

If we continue along the path defined by their hoax, and acquiesce to its taint of racism, and remain good men who do nothing, then all is lost.

At the top of the socialist pyramid is an eye, but whose eye would that be?

Western culture’s unique gift to the world was the abolition of slavery, but it seems to me that the world wants to return to its shackles: Nazi shackles, communist manacles, or the ball and chain of Islam.

Or we conservatives can forget our differences, we can unite and fight, make war against those who wish to inundate us with their modern versions of the failed fanaticisms of yesteryear. We CAN drain the swamps — if we work together!

86 thoughts on “The Hive Mind”