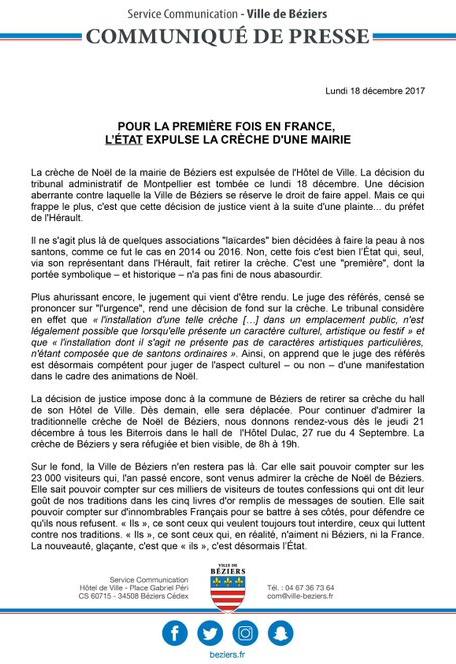 We reported last week on Robert Ménard, the Front National mayor of the town of Béziers in the South of France. Mr. Ménard had sinned against French secularism by setting up a Christmas crèche at the town hall. The local prefect demanded that the mayor take it down, but he refused.

Now the prefect has taken action. Many thanks to Ava Lon for translating this press release from the town of Béziers, as posted on Twitter:

For the first time in France, the state expels the Nativity Scene of a town hall

The Nativity Scene at the office of the mayor of Béziers is expelled from the Town Hall. The decision of the Administrative Court of Montpellier fell on Monday, December 18th. An aberrant decision against which the City of Béziers reserves the right to appeal. But is the most striking is that this court decision comes after a complaint… by the prefect of Hérault.

It’s no longer a question of some nasty secular associations determined to do our figurines in, as was the case in 2014 or 2016. No, this time it is the State which, alone, via its representative in Hérault, has the Nativity Scene removed. It’s a “first”, whose symbolic —and historical— significance is absolutely stunning to us.

More staggering still, the judgment that has just been rendered. The judge hearing the application, who is supposed to rule on the “urgency”, makes a basic decision on the Nativity Scene. The court considers that “the installation of such a Nativity Scene […] in a public place, is legally possible only when its character is cultural, artistic or festive” and that “the installation in question does not exhibit any particular artistic character, being comprised only of ordinary figurines.” Thus, we learn that the judge is now competent to judge the presence —or absence — of the cultural aspects of an exhibition in the context of Christmas animations.

Bottom line, the city of Béziers will not let this rest. Because it knows it will be able to count on the 23,000 visitors who, last year alone, came to admire the Christmas Nativity Scene of Béziers. It knows it can count on these thousands of visitors of all faiths who have expressed their liking for our traditions in the five visitors’ books filled with messages of support. It knows it can count on myriads of French people to fight at her side, to defend what they refuse us. “They” are those who always want to ban everything, those who fight against our traditions. “They” are those who, in reality, neither love Béziers nor France. The novelty, chillingly, is that “they” are now the State.