There is still peace though not for me and not
Perhaps for long — still peace on the bevel hills
For those who still can live as their fathers lived
On those islands.
— Louis MacNeice

The Isle of Lewis is a remote island in the Outer Hebrides with a tiny population. Strictly speaking, Lewis is the northeastern part of an island, the southwestern portion of which is the Isle of Harris. Together they form the outermost part of northwestern Scotland. The language there is mainly Scots Gaelic, but the Vikings ruled there for centuries, so the deep structure of the place — both the towns and the place-names — seems to be Old Norse. 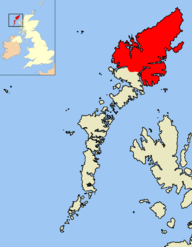 As you can see from the map, the Isle of Lewis is about as far away as you can get from anything in Europe. Only Shetland and the Faeroes are more remote.

Given the remote location, the climate, the language, and the fragile economy of the island, there would seem to be no rational motive for encouraging the settlement of immigrants on the Isle of Lewis. Nevertheless, the local franchise of the Powers That Be decided to bring Syrian “refugees” to the island.

If there were ever any doubt that the push for “refugee resettlement” is deliberate and being coordinated at a trans-national level, the shipment of refugees to the Isle of Lewis would eliminate it. For malign and occluded purposes, Muslim immigrants are being pushed into every nook and cranny of Western Civilization.

I received this email yesterday from a reader who lives on the Isle of Lewis:

As you know, I live in an absolutely white homogeneous society. An island society.

In 2015-2016 the gates were opened. The local council in their inestimable wisdom decided to actively encourage three Syrian families to settle here. No vote was taken over this with the local people. This isle had a family of Bangladeshis running the curry house and a Chinese family running the Chinese takeaways, etc. There are no negroes living on the isle; there are a couple of half-castes — excuse me if I don’t use political correctness, but I don’t know that vocabulary.

Anyway, after the arrivals of the “Syrian” families, a year later there was a call for an Islamic centre to be established, as there were twenty Muslims who needed a place. So the Church of Scotland offered a derelict property to someone. Who? What organisation? What the hell?

I’m getting on in years, and I’m thinking extreme violence of the nastiest kind is the only resort. However, being so ancient and antique, that is beyond my means, and my son just writes me off as a conspiracy theorist. That is so convenient, being written off as a conspirator.

The same story is being played out throughout the Western world. Without being consulted in advance or allowed a say in the matter, local communities are having their allotment of “refugees” pushed on them. Anyone who objects to the action is stigmatized as a “racist” — I’ll bet a Scots Gaelic term for “racism” has now been devised for residents of the Outer Hebrides whose native language is not English.

Next comes the “Islamic center”, a.k.a. mosque, a.k.a. the barracks and armory of Islamic domination. Then “family reunification” and the resulting chain migration, so that the population of Muslims doubles every few years.

Such is the future for the Scottish islands. If you want to monitor the news from Lewis and the Outer Hebrides, here are three local news outlets:

The following poem about the Hebrides was written ca. 1938 by Louis MacNeice. Among other things, it describes the encroachment of modernity on the traditional way of life in the Western Isles. Eighty years later, the nature of the encroachment has become something that poet could never have imagined:

On those islands
The west wind drops its messages of indolence,
No one hurries, the Gulf Stream warms the gnarled
Rampart of gneiss, the feet of the peasant years
Pad up and down their sentry-beat not challenging
Any comer for the password — only Death
Comes through unchallenged in his general’s cape.
The houses straggle on the umber moors,
The Aladdin lamp mutters in the boarded room
Where a woman smoors the fire of fragrant peat.
No one repeats the password for it is known,
All is known before it comes to the lips —
Instinctive wisdom. Over the fancy vases
The photos with the wrinkles taken out,
The enlarged portraits of the successful sons
Who married wealth in Toronto or New York,
Cajole the lonely evenings of the old
Who live embanked by memories of labour
And child-bearing and scriptural commentaries.
On those islands
The boys go poaching their ancestral rights —
The Ossianic salmon who take the yellow
Tilt of the river with a magnet’s purpose —
And listen breathless to the tales at the ceilidh
Among the peat-smoke and the smells of dung
That fill the felted room from the cave of the byre.
No window opens of the windows sunk like eyes
In a four-foot wall of stones casually picked
From the knuckly hills on which these houses crawl
Like black and legless beasts who breathe in their sleep
Among the piles of peat and pooks of hay —
A brave oasis in the indifferent moors.
And while the stories circulate like smoke,
The sense of life spreads out from the one-eyed house
In wider circles through the lake of night
In which articulate man has dropped a stone —
In wider circles round the black-faced sheep,
Wider and fainter till they hardly crease
The ebony heritage of the herded dead.
On those islands
The tinkers whom no decent girl will go with,
Preserve the Gaelic tunes unspoiled by contact
With the folk-fancier or the friendly tourist,
And preserve the knowledge of horse-flesh and preserve
The uncompromising empire of the rogue.
On those islands
The tethered cow grazes among the orchises
And figures in blue calico turn by hand
The ground beyond the plough, and the bus, not stopping.
Drops a parcel for the lonely household
Where men remembering stories of eviction
Are glad to have their land though mainly stones —
The honoured bones which still can hoist a body.
On those islands
There is echo of the leaping fish, the identical
Sound that cheered the chiefs at ease from slaughter;
There is echo of baying hounds of a lost breed
And echo of MacCrimmon’s pipes lost in the cave;
And seals cry with the voices of the drowned.
When men go out to fish, no one must say ‘Good luck’
And the confidences told in a boat at sea
Must be as if printed on the white ribbon of a wave
Withdrawn as soon as printed — so never heard.
On those islands
The black minister paints the tour of hell
While the unregenerate drink from the bottle’s neck
In gulps like gauntlets thrown at the devil’s head
And spread their traditional songs across the hills
Like fraying tapestries of fights and loves,
The boar-hunt and the rope let down at night —
Lost causes and lingering home-sickness.
On those islands
The fish come singing from the drunken sea,
The herring rush the gunwales and sort themselves
To cram the expectant barrels of their own accord —
Or such is the dream of the fisherman whose wet
Leggings hang on the door as he sleeps returned
From a night when miles of net were drawn up empty.
On those islands
A girl with candid eyes goes out to marry
An independent tenant of seven acres
Who goes each year to the south to work on the roads
In order to raise a rent of forty shillings,
And all the neighbours celebrate their wedding
With drink and pipes and the walls of the barn reflect
The crazy shadows of the whooping dancers.
On those islands
Where many live on the dole or on old-age pensions
And many waste with consumption and some are drowned
And some of the old stumble in the midst of sleep
Into the pot-hole hitherto shunned in dreams
Or falling from the cliff among the shrieks of gulls
Reach the bottom before they have time to wake —
Whoever dies on the islands and however
The whole of the village goes into three day mourning,
The afflicted home is honoured and the shops are shut
For on those islands
Where a few surnames cover a host of people
And the art of being a stranger with your neighbour
Has still to be imported, death is still
No lottery ticket in a public lottery —
The result to be read on the front page of a journal —
But a family matter near to the whole family.
On those islands
Where no train runs on rails and the tyrant time
Has no clock-towers to signal people to doom
With semaphore ultimatums tick by tick,
There is still peace though not for me and not
Perhaps for long — still peace on the bevel hills
For those who still can live as their fathers lived
On those islands.

75 thoughts on “Cultural Enrichment Comes to the Isle of Lewis”