Matt Bracken has made a meme using a still taken from the video below. His topic is the carefully planned and executed “rescue” of migrants who cross the Mediterranean — usually just a few miles of it — in flimsy boats. He says:

This is a massive effort by Soros and others like him. There was no market for these boats prior to the planned hijra invasion of Europe. They have no sporting or military use and were not built anywhere in the world prior to the migrant invasion.

Boat plus engine cost at least $10,000, and probably double or triple that, delivered to Libya. They are suitable only for short-range one-time use by migrants who have the expectation of being picked up by NGO “rescue ships” that will ferry the migrants to Italian ports.

These massive and overloaded rubber boats are death traps if the weather turns bad or they are not “rescued” almost immediately, and within sight of Libya, by waiting NGO ships.

This invasion of Europe under the guise of an ongoing “rescue operation” is as carefully planned as D-day in 1944. There are deep pockets behind it, and Quisling traitor politicians in Italy and Europe who are being bribed to continue the charade. Concerning the likes of Reinier Boere, the SeaWatch mission director seen in the video, words fail me. 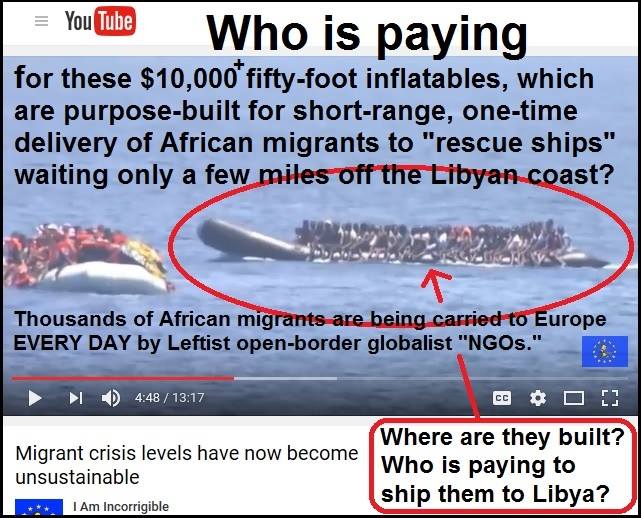 Leftist quislings on full display and proud to be destroying Europe:

3:13 in: “Make no mistake: as well as a rescue mission, this is a political act, and the organization and the crew by and large have a left-leaning open-borders world view which some will find unpalatable. For example, what’s happening in the stern as we speak, the political equivalent to nailing your colors to the mast.” (Shows white Europeans around a flag that says “Build bridges, not walls.”)

46 thoughts on “Matt Bracken: The Deep Pockets Behind the Migrant “Rescue” Industry”