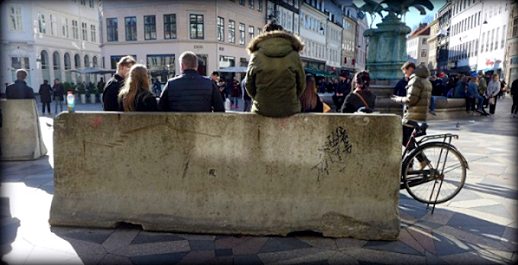 Last year saw a number of instances of “vehicular jihad” in Europe, with the worst attacks being in Nice and Berlin. In response, the civic authorities brought in the cranes and dropped big concrete blocks — what we call “Jersey barriers” in the USA — all over the downtown areas of major cities in Western Europe.

When special events take place, such as festivals, rock concerts, parades, etc., additional barriers are set up on a temporary basis. But the ones in high-traffic shopping districts or tourist zones look to become permanent fixtures, and as a result, municipal governments are trying to pretty them up — putting lipstick on the ubiquitous pig of Islamic terrorism.

In Denmark the authorities refer to such barriers as “terror-blocks”, but Danes being Danes, the popular term for them is “Koran-blocks” (koranklodser).

The following article from Fyens Stiftstidende makes the case for keeping the Koran-blocks ugly.

Many thanks to Tania Groth for the translation:

“Koran-blocks” should not be pretty — they should be ugly

In 2005, the street artist Banksy decorated the Israeli security wall that Israel had built around Bethlehem and Jerusalem to keep terrorists from Palestine out. The wall has proven effective in reducing the number of Palestinian suicide bombers in Israel, but it has also caused a number of inconveniences for Palestinians in general, so as Banksy painted on the security wall, an elderly Palestinian man addressed the artist.

In Denmark in 2017 we have experienced an explosion in terrorism related security measures in the form of raw concrete structures to ensure that terrorists cannot drive trucks into pedestrians and participants in events in major cities. These concrete blocks are what the media call terror-blocks, while the in popular lingo they have been renamed Koran-blocks, as attacks perpetrated by using lorries and vans almost all (with one exception) have been carried out by devout Muslim terrorists. You can now experience these Koran-blocks on Strøget (pedestrian street), Nyhavn, at Tivoli Gardens and Copenhagen Central Station.

In Aalborg, a Koran-block has been placed at the end of the entertainment-heavy street Jomfru Ane Gade, and the entire city of Aalborg was literally littered with this type of counter terror measure during the recently completed DGI sports event — and the concrete blocks were also used during the carnival in May. The concrete blocks are not pretty. They are raw and look like foreign objects in a city’s environment. In addition, they obviously lead our thoughts to the terror that often hits European cities. In front of Tivoli they have enclosed these blocks in green boxes with the name of Tivoli printed upon them. These green boxes also function as benches. At the DGI event, the municipality covered the Koran-blocks with cloth advertising the municipality of Aalborg. At Rådhuspladsen [City Hall square] in Copenhagen, the company Tag Tomat have been remodeling one of the Koran-blocks so that it appears as a wooden-covered bench with a bicycle rack and flower bed.

“The idea is that we want to remove people’s fears of war and terror. War and terror exist, but if we change people’s fear and anxiety, we can make them communicate more,” says Anne Tange from Tag Tomat about the remodelling.

In Nyhavn, where the raw Koran-blocks had stood raw, after a few weeks they painted the blocks dark green. The text “Nyhavn” and a heart in gold are painted onto the dark green bottom. This is, in the words of Snaphanen an attempt to make terrorism appear “cute”.

As a society, we should ask ourselves whether security measures against terrorism should be beautiful. Or if these measures against terrorism, out of principle, should be ugly. There is something quite bizarre in utilizing, aesthetizing and — indirectly — idealizing the terrorist threat and the need for anti-terrorism measures such as these. Basically, the concrete elements have a raw and temporary character. As we embellish the concrete elements and make them into benches and advertising pillars, we also as a society accept these counter-terrorist measures as being of a more permanent character, thereby giving up the hope that the terrorist threat and the need for security measures against terrorism is a transient phase that will be replaced by more peaceful conditions within a reasonable period of time.

It is a sign of defeat, not for the terrorists, but for the idea that our free and open Western society is only suffering a temporary setback. Therefore, these Koran-blocks should not be pretty. They have to be ugly. It preserves the hope that terrorism is temporary and that the terror is merely a passing phase.

27 thoughts on “If Koran-Blocks Must Be Ubiquitous, Let Them Be Ugly”