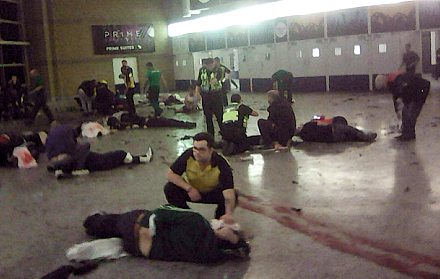 The following op-ed from the Swiss outlet Basler Zeitung juxtaposes the jihad massacre in Manchester with Donald Trump’s speech in Brussels, and draws some politically incorrect conclusions.

Manchester and Brussels: the attack and the NATO meeting. The first is a tragedy, and the other is a farce.

Saffie Rose Roussos was 8 years old when she was killed on Monday in Manchester, by a bomb detonated in the Manchester Arena by a 22-year-old man, who blew himself up in the process. Saffie, with her mother and sister, had already seen the concert by the singer Ariana Grande, a favorite star of young girls, who had come here by the thousands. Then, when the concert was over and the children and their parents were streaming to the exits, the assassin stepped into the foyer and killed everything that moved. All in the name of his Islamic ideology — a mix of supposed piety and bloodlust. 22 people died, including seven children. Dozens were injured, some seriously. The bomber had filled his bomb with nails, screws and bolts, to impact as many people as possible as brutally as possible.

“Saffie was just a beautiful little girl in every sense of the word,” said Chris Upton, the principal of Saffie’s elementary school. “Everyone liked her and we will lovingly remember her warmth and friendliness. Saffie was quiet and modest and had a creative streak.” Saffie’s mother and sister survived the massacre, but were wounded and are still in the hospital. Her parents run a fish-and-chips restaurant — simple folk who wanted to give their children a nice time that evening.

Scene change. Not long afterward, a picture of those who at every such occasion declaim their horror and their solidarity loudly and at length, which costs them nothing. And who are, thus, partly responsible for the horror suffered by ordinary people all over the West and beyond. The NATO politicians line up in the NATO headquarters to listen to a speech by the American president, for whom they would never have voted, as is obvious in their distressed expressions. If they are suffering from anything, it is this speech.

And yet the two pictures belong together: Saffie Rose Roussos, the little dead girl in Manchester, and the political elite of Europe (and North America), bemoaning what they themselves helped cause, and still refuse to change.

If there is any reason why these well-educated, well-paid, carefully coiffed, chauffeured and attended rulers must listen to the speech of this disfavored person, it is because they have failed. It is not a popular thing to say in these circles. But when Western politicians can no longer prevent little girls like Saffie from being slaughtered anytime and anywhere for political reasons, then they are useless. States or defensive alliances that can no longer guarantee the security of their citizens are worthless. A political elite that fails in almost every instance that we care about may be the false elite that it pretends to be replacing.

They would not be standing, somewhat embarrassed, here in Brussels, and Trump would never have entered the White House, if his predecessor Barack Obama had not silver-tongued his way through eight years, and left only ruin behind. The new French president, Emmanuel Macron, would not be blinking uncertainly here in the sun if his predecessor François Hollande had not spent five years extending the ruination of his wonderful country.

Angela Markel is failing too, and is still standing here. Almost incomprehensible, unless you are a German voter. Whether it’s the euro, or Brexit — to which she drove the Brits — or Greece, or the energy policy switch or the refugee crisis — she has made so many mistakes that it may have made her invulnerable. People have stopped counting and just don’t believe that such a modest-seeming politician is so likely to shove someone off a cliff. “This presumptively terrorist attack,” she said, referring to Manchester, “will only strengthen our resolve to go forward together with our British friends against those who plan such inhumane deeds.” Seldom has there been such a hollow-sounding statement of solidarity.

Two years ago the same woman said “We can do it” [Wir schaffen das] and invited millions of people — random, unevaluated — to come to Europe, from countries where it was known that terrorists had recruited many young men (and a few women), and are continuing to do so. If there is even one terrorist hidden among 1,000 refugees, that is enough for an attack in Manchester or Munich or Mannheim.

It takes some chutzpah to talk like that, to shed crocodile tears — crocodiles being only “presumptively” bad. How differently Trump speaks. And whenever he has his head on straight and says something, I understand why the elite of the status quo — not just here in Brussels, but in Washington — hates and fights him. Because he is right, and they know it.

Donald Trump is correct in holding the failed immigration policy of the West, among other things, responsible for Manchester. He is right to say in NATO headquarters in Brussels that 23 of 28 member states are not paying their fair share for defense. Brussels often denounces us Swiss as freeloaders and cherry-pickers, so it is good to see this cataloguing of egotism. 2% of GDP is what the NATO countries have agreed as a common contribution. Only five are fulfilling their obligation.

As a counteraction to this wretched fiscal morale of the Belgian state, NATO recently moved into a new headquarters, at the cost of over a billion euros. Trump was also right in saying that he never asked what this glass building had cost, “But it is beautiful.” For that bit of sarcasm, they would have gladly fed the New York billionaire poison. And Trump is right in saying that they could have devoted 119 billion dollars to the battle against terrorism and uncontrolled immigration, if the other NATO nations had fulfilled their obligations. In terms of defense expenditures, Switzerland is just as much a freeloader on the Americans and their implied guarantee of security. Our defense budget is ca. four billion francs. If we were in NATO, it would have to be around 13 billion. It is high time to change that.

The leaders of Europe stood before Donald Trump like schoolchildren who had done something. They seemed awkward, caught out. They whispered like kids, tried to make jokes, although they knew the teacher had caught them. It was a great appearance by Donald Trump, the outsider they all hated and therefore opposed. Instead, they ought to fight the ones who are making life hell for us here in the West, those “presumptive” murderers who killed Saffie, that little girl who was a fan of Ariana Grande.