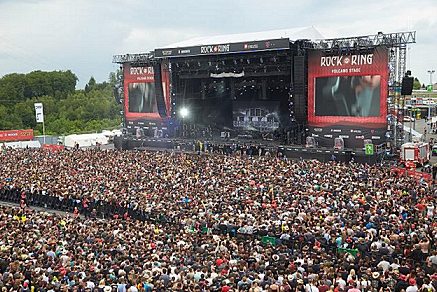 What happened at the Rock am Ring festival was breaking news earlier today. Egri Nök sends the following brief report and translation, and a video from FOCUS.de will be processed separately:

“Rock am Ring”, Germany’s largest rock music festival with tens of thousands of visitors, is being evacuated right now. A terror warning came in 30 minutes ago.

The name means “Rock at the Ring” — “The Ring” is the famous Formula1 racing course Nürburgring in the Rhineland.

Rammstein were supposed to be headlining the event.

Here’s her translation of a report from FOCUS.de:

The music festival Rock am Ring, attended by tens of thousands of music fans, has been stopped by a terror warning, according to the organizers.

The organizers of the three-day festival announce that police instructed them to ask visitors to leave the grounds “because of a terror threat situation”.

This is the late-night press conference from a while ago by the organizer Marek Lieberberg. I haven’t watched it yet, but I heard it was good and he was angry. Lieberberg is well-respected in the German music industry; he has been organizing concerts for some twenty years now.