Citizens of Munich were polled recently about their feelings concerning Islam, and almost 90% of them didn’t care for it all that much. Conclusion? Surprise: Munich natives are WAYCISTS!

Egri Nök, who translated the article below, includes the following introduction:

9 out of 10 Munich natives skeptical about Islam

A newspaper in Munich reports “alarming” results from a study: 9 out of 10 Munich natives feel resentment towards Muslims, according to the Abendzeitung.

But let’s look at what people actually said. They were given this task: 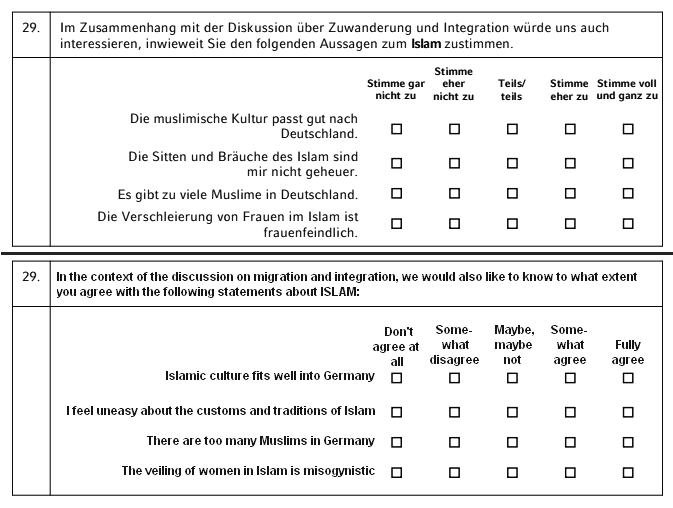 Rate these questions with:

In the context of the discussion on migration and integration, we would also like to know to what extent you agree with the following statements about ISLAM:

So what happened is that they asked people about their attitudes towards a certain and very specific ideology, and then made the people look like racists, by using the terms “Muslims” instead of “Islam”.

The “illness” they assign to the participants — to the whole of society — is “group-specific hatred of people”. This term is a new creation right out of the sociology seminar, and is intended to be an umbrella term for racism, right-extremism, discrimination and Social Darwinism.

It is worth mentioning that the authors of the “study” note that there appears to be a correlation between critical attitudes towards Islam, which they try to denounce as racism, and “a strong identification with Germany”, especially among males.

Unsurprisingly, the study concludes that more measures against “right extremism, racism and discrimination” are needed.

Hostility towards specific groups of people*

LMU Study: 9 out of 10 Munich natives are down on Muslims

“There are too many Muslims in Germany”: many of the Munich natives in a representative study agreed with this statement.

A study by the Ludwig Maximilians Universität about group-specific hatred for people reveals shocking results. Only every tenth does not have a bother with Islam.

Group-specific animosity towards people is still a common phenomenon in Munich. A study by the Ludwig Maximilians Universität (LMU) produced clear numbers here, especially as to the deprecation of people of the Muslim faith, long-term unemployed people, refugees, and Sinti and Roma.

Almost half of the 18+ German-speaking representative natives of Munich have a medium (31 percent) or even strong hostility (18 percent) towards Muslims. 38 percent, according to the study, have a “slight group-specific animosity towards people” regarding Muslims.

This means that only 12 percent of the participants do not have any reservations whatsoever about people of this faith — barely every tenth person.

Hate found its way into society, according to the researchers

The LMU-scientists proposed three assertions for their survey: “Islamic culture fits well into Germany”, “I feel uneasy about the customs and traditions of Islam” or “There are too many Muslims in Germany”. The participants were asked to reply in grades of agreement or rejection.

But a hostile attitude towards foreigners, and classical racism, barely found any approval.

Hatred towards strangers, minorities, and people who choose to live differently, found its way into the middle of society, the researchers conclude. There should be measures against that, aimed at the broader public.