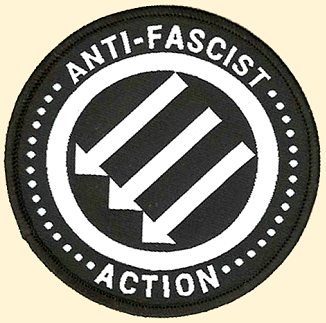 In my previous photo-essay on Antifa in the USA, I left out the link for the website that sells Antifa merchandise. It’s a must! No self-respecting anti-fascist revolutionary can do without the latest trendy gear when battling those KKK-loving Trump supporters on the mean streets of Nashville or Denver.

Another instance of the three-arrows logo may be found in the Young People’s Socialist League.

Henrik Clausen sends this note with his observations about Antifas at the pro-Trump rally in Denver:

By the way, a few non-Blackshirt protesters stayed behind when the real Antifas crossed Lincoln seeking to break through the police line. Given the number of rattlesnake flags I saw, the troopers did well in protecting the Blackshirts from the real men up there…

Also, here’s Henrik’s video of Antifa activists milling around at the fringe of the rally. Many thanks to Vlad Tepes for uploading it:

Previous posts about Antifa in the USA:

9 thoughts on “More on Antifa”