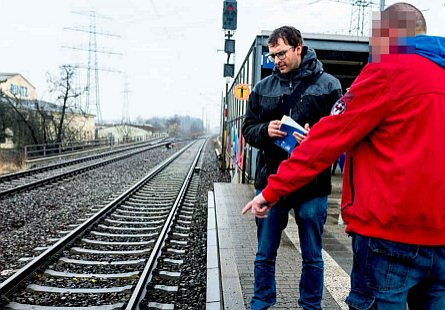 As a follow-up to Saturday’s post about the man in Dresden who was pushed in front of a train by migrants, Egri Nök has translated an article from today’s TAG24:

Two men shoved him in front of a train and are already free again: Now the victim speaks

Dresden — When the S-Bahn rushed towards him, René J. (40) stood in the track bed as if paralyzed: “I thought, this is it.” — the Dresdener wound up his life. Only the engine driver’s quick reaction saved the family father — emergency braking!

The two attackers who nudged him onto the tracks were arrested — and let go again (TAG24 reported). Inconceivable for the victim: “In my eyes it was attempted murder!”

[photo caption: father from the family of René J. (40) from Dresden returns to the crime scene, two days after the inconceivable act of violence.]

The S-Bahn stop Zschachwitz on Sunday. Two days after the stunning deed. René’s hand is shaking, he points to the spot one meter lower on the track bed: “They would not let me up again. I will never forget their faces…”

For six years the technician has been riding this train — he boards it in the west of Dresden, and leaves it in Zschachwitz. Then it is only a few minutes by bike to work. There has never been any incident — until Friday.

At 4.41 AM, René J. leaves the train as always; the morning is dawning. As always, he lightens a roll-up cigarette. Two inebriated men also leave the train. “They approached me, pointed to my cigarette, did not speak any German. I said no, and wanted to leave. At that moment the main attacker kicked my bike with full force. I grabbed him and pushed him against a pole. The other one pushed me. There was wrestling, but it was not I who initiated the aggression.”

Then, the main attacker whacks the bike against René J. — who falls onto the track bed. “I tried to climb up again several times.”

But the main culprit prohibits that. Again and again. “I tossed my bike on the platform, he dashed it back upon me, kicked after me with his foot.”

Suddenly a loud horn sounded: the incoming S-Bahn! “I was in a panic; one last time I tried to get back up. But the main perpetrator did not let me.” René J. is looking to the left: “I felt like paralyzed, I just heard the screeching of the brakes, saw sparks flying — I thought, this is it. The end.” The train came to a halt — a few meters in front of René. He, his wife, and his stepdaughter feel grateful with all their hearts to the engine driver who reacted so quickly.

But René J. cannot understand the conduct of the judiciary. The state prosecutor let the asylum seekers —from Morocco (23) and Libya (27) — who were already known to the police — walk free after their initial arrest, and are only investigating for dangerous battery and coercion.

“People who do something like that, no matter their nationality, belong behind bars,” says René. The state prosecutor could not be reached for a statement on Sunday. René J. wants “no revenge, no apology. But I am scared of seeing the perpetrators again. I just don’t know how I will react.”

The other two photo captions: