A while back a reader named pistache tipped us to a newly-released French book entitled Guerilla:

It’s a novel by the journalist Laurent Obertone, set in a not too distant future, where an attack on a cop degenerates into massive riots by the ‘suburbs youths’. Coupled with a terror attack, it brings about the collapse of the French state in the matter of a few days.

This prophetic novel suffers from a near-total media blackout, and is ‘hidden’ in some stores, but has still managed to become a best seller (in the top three in many stores, #1 in all categories for a couple of days this week [first week of October 2016] on amazon.fr).

Ava Lon acquired the book, read it, and wrote the following review. As far as I know, Guerilla is not yet available in English. However, readers who understand French may want to take a look: 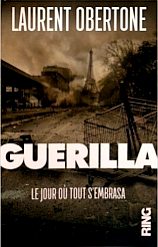 The French author Laurent Obertone recently published a book entitled Guerrilla. It is set in Paris in a near — perhaps very near — future. For those who read Jean Raspail’s The Camp of the Saints, the story will sound familiar: France has been invaded by a hostile culture and lives in a permanent state of emergency. When it looks like it cannot get any worse, it does.

As long as there are still civilized things such as electricity, running water and gas stations, the nation is able to carry on. There is, however, that tipping point, where the hostile invaders — who don’t appreciate food, water and energy resources, but take them for granted — decide that the time has come to fulfill their religious mission and destroy the host for good.

Like any other parasite, they don’t anticipate their own demise after they get rid of those who have fed them. They seem unable to conceptualize anything extending beyond the current day, even though they talk about some glorious future in a utopian Caliphate. So it seems they have spent the last twenty years rioting, breeding children, making demands, destroying property, harassing women and cashing welfare checks.

Today some of them have decided: This is the day we take over; or, for some of them, the day of meeting their Maker — or so they think — and the promised 72 virgins. It is not a coordinated effort; just as on many previous occasions, the ‘no-go zones’ get upset about something meaningless, which allows them to burn some cars and break some shop windows . This time, however, the president himself goes to talk to them and as he approaches the crowd, not sensing the danger — or maybe in his condescending arrogance he fails to appreciate the volatility of the situation — he is “swallowed” and killed by the mob. 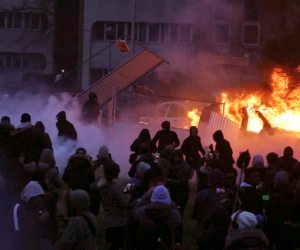 This is the tipping point. The last thing they “respected” or for which they would expect punishment or retaliation. So they stand there for a couple of seconds, and when no such reprisal occurs, they know France is theirs.

With the author we follow several French people, some of whom already surrendered in their heads a long time ago. Some of them commit suicide or are ready to be killed; they are not willing to put up a fight even when they are armed… Some want to live, but hope they can escape: escape Paris to a different part of the country, escape the town for the countryside, save their spouse, children or just their sorry butts.

Nobody really puts up a fight; nobody is planning a resistance. Nobody seems to believe resisting is even an option. There’s a group of cops from the special police force, who will fight until they have no more bullets, knowing that no reinforcements will ever arrive.

There’s a lonely avenger who proceeds to kill the worst traitors: journalists and politicians. But even he is doing that to make a statement before all is inevitably lost.

Unlike Jean Raspail, however, who shows us at the end of his book the last country, Switzerland, surrendering to the invasion, Obertone lets some of his characters live, giving us hope that there will be more to come, because the guerrilla war hasn’t started yet.

40 thoughts on “After Things Fell Apart”