We reported in Wednesday night’s news feed that a Moroccan mole in Geert Wilders’ security detail had been caught leaking information to an organized crime group. The arrest made headlines in the Netherlands, and Prime Minister Rutte took the unusual step of meeting with Mr. Wilders to discuss what happened.

Our Dutch correspondent has prepared a report on this alarming incident, along with related Dutch political matters.

Wednesday a political bombshell exploded in The Netherlands.

A policeman with dual nationality (Moroccan and Dutch) leaked information to Moroccan criminals and possibly to terrorists. He was employed in the Dienst Bewaken & Beveiligen. This is a special police security unit that protects the royal family and people in serious danger. This is the service that protects Wilders. It get far worse. This man, Faris K, was not only working for that service. He was also assigned to the IRIS team that protects Wilders himself. He was not working in the bodyguard team personally, but worked as an advance scout.

It gets even worse… Mr. Faris was arrested and released the very next day. He can await his trial at home. No, we aren’t done yet. Mr. Faris has a brother. Mohammed K. He also worked for the police in Utrecht. There he was suspended for leaking sensitive information in 2007.

Theo van der Plas and Michel Beaten, who supervise the Dienst Bewaken & Beveiligen have resigned at the request of their superiors.

This comes on top of another scandal.

For some time now a sphere of corruption, abuse of power, and too much work have affected the service. The police officer in charge, Mrs. van den Berg resigned in November.

In a nutshell: Wilders wouldn’t be far wrong if he decides he’s better off making his own arrangements. The problem is that this is absolutely forbidden under Dutch law. The police, corrupt and inept as they are, have the absolute monopoly here. The law explicitly forbids it. You can’t even carry a Swiss army knife as a private citizen. Let alone something else. Much less use it, should it become necessary.

The PVV has canceled all public campaigning involving Wilders and other PVV parliamentarians. Until the ministry comes with a much better answer than ‘Wilders wasn’t in danger at any time’.

He was going to campaign in Volendam. You all know that charming little village. If you see typical Dutch costumes: the white cap for ladies, wide trousers for men, both on wooden clogs, that’s Volendam. The Volkskrant (virulent left wing newspaper) found it funny to make a cartoon about that visit.

[Note from the Baron: The original location for the Volkskrant cartoon was here, but the link no longer seems to work. An article where it once appeared times out when I try to access it.

I located a thumbnail of the cartoon in an Internet cache, so that you can get the idea: 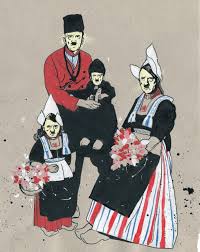 Half the country is up in arms. You can’t do something like that. Why on earth are you all offended? retorts the Volkskrant. It’s just an innocent joke. They refuse to withdraw the cartoon, or to offer apologies. Here’s another beauty, made by the NRC Handelsblad (nicknamed NSB Handelsblatt) a couple of years back.

Again, nothing wrong here. But heaven forbid if Wilders says “less, less, less…” That is a serious criminal offense.

Of course, the mohammedan community is outraged by the arrest of Faris K. It is a conspiracy by Wilders himself. There aren’t any Moroccan-Dutch criminal gangs. This is racism at its worst. That sort of thing.

A couple of days ago, the PvdA (Labour) parliamentarian Marcouch said PVV supporters shouldn’t be employed by the police. The only voices of protest came from the PVV. Just about everybody else either looked the other way, or nodded in agreement.

Now, suppose Wilders were to say exactly the same today. With very good reason, mind you. Guess what would happen? Yup. The Wilders III trial.

It doesn’t stop there. Mr. Tunahan Kuzu openly said that Dutch physicians euthanize elderly mohammedan patients. He wasn’t even arrested for it.

Yes, people disagree with him. But that’s about it. Of course he wasn’t talking to the dhimmis. He was talking to his Turkish voters, who lap it up as if it were Turkish delight. What about the Dutch dhimmis? Well, it’s unfortunate that they heard that, but they’re dhimmis. What can you expect? The left, of course, disagrees with him, but will defend his right to say what he wants to the death (of Wilders, of course)!

According to the polls, the VVD is now leading. The PVV was reduced to second place. As I wrote before: I have very little trust in the polls. This election I have no trust in them at all. Why? The VVD is limping from scandal to scandal. The latest one: the party with the most parliamentarians either in jail for fraud or on trial is … the VVD. They have held that No. 1 position for five years non stop.

We’ll have to see what the people decide on the 15th of March. And how much voting fraud will be committed by the entire political spectrum to rig the results in their favor. I still expect a landslide victory for the PVV. But as you can read, I feel ashamed to be Dutch now.

60 thoughts on “Geert Wilders Might Be in Serious Danger”