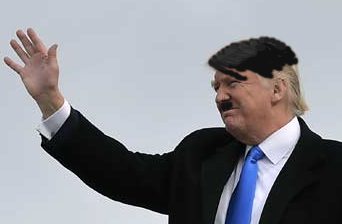 The Trump Era has turned into a triumph for Godwin’s Law, and nowhere more than in Germany, where the Gutmenschen are filled with Schadenfreude over the rise of the American Führer.

Many thanks to JLH for translating this essay from Die Achse des Guten:

Not everything has gotten worse since Donald Adolf Trump seized power. Certain media are profiting mightily from the poltergeist in the White House. The left-leaning broadcaster CNN for example, which had limped along behind its rightist counterpart Fox News, all at once is showing rising viewer numbers. And the Trump Effect has brought the New York Times — which had also seen better days — an unexpected and considerable number of new subscriptions.

Trumpophobia is perhaps even more rampant in Germany than in the original homeland of everything and everyone evil. Here, where we have always known all there is to know about how American politics is supposed to work, practically the entire media establishment has spent weeks slaving over the capers of the great decree-maker. Almost forgotten are the immigrant crisis, Dieselgate, the euro schlimazel, or the misdeeds of the AfD. Not one soul is still writing about the Panama Papers or the Soccer Leaks. Trump, Trump and more Trump — nothing else.

It pays off. Spiegel, with years of steadily declining circulation, finally hit it big with Trump on the cover — once as a comet racing towards the earth, once as a blood-spattered slaughterer of freedom. Stern, too, which has recently experienced two historic lows, sold well with Trump. Zeit is rousing emotions among readers and thinkers and doing very well for itself. Even the good old Frankfurter Allgemeine is sucking the last drop out of this repulsive sponge. And according to Breaking News, a couple married 22 years has split because of Trump-induced irreconcilable differences.

Führer Trump is as Good as a Bank

And the official services? Are on Cloud 9. No editor for a tax-supported broadcaster will need to think in coming years about political magazine presentations, satirical offerings or talk show subjects. Führer Trump is a treasure.

Even homeless journalists are getting their chance at 15 minutes of fame through him. An independent author named Mareike Nieberding, who has written articles on fashion and coolness and found answers to thorny life questions for the hipster periodical Neon (“The never-ending back and forth before a date is nerve-wracking”) had her epiphany when The Donald began his run at the end of last year. She decided to become an activist.

Herewith, I am founding a youth movement. I know that you don’t found a movement, but become one, or better yet, are one. But I don’t want to wait. I can no longer look on. I am skipping the BECOME and proclaiming the IS. Like most people in my bubble, in my media, in my world, I am shocked, fearful, panicked, I feel helpless. As a person, as a woman, as a journalist.

Thunderation! Mareike, who lives in the federal capital, founded the “youth movement DEMO.” The name stands for “democracy, demonstration and demolition of demons.” Mareike already has many comrades-in-arms (on Facebook). “Crazy feeling,” “genuinely important,” “there are already meetings” bubbled out of her, as she made her six-minute appearance in the ZDF culture program “Aspekte.”

Where she was of course addressed in the familiar “du” by the hostess.

“Keep on Rocking in a DEMO World!“

Mareike is really not so new. But the leap from journalist to activist has acted as a fountain of youth. So the 30-year-old is throwing out sentences like a sweet sixteen: “Women, girls, teens and all men who read woman: Julia Knolle and I have talked a little about DEMO and our movement. Keep on rocking in a DEMO world!”

What is it about, err, content-wise? Well, it’s about this demon. He’s got to go, go go! With this agenda in hand, Mareike and her comrades meet for a “Trump brunch” in Berlin or a “save-democracy-camp” in Hamburg. No need at those meetings to go into what exactly Trump is doing wrong. It’s enough that he scares Mareike and Friends s***less.

She counts herself one of Generation Y, but does not belong to Generation Snowflake. The one that consists overwhelmingly of young women who — according to a wiki-nition — “ are unable to tolerate divergent opinions.” So they demand safe spaces, as in some American universities. There are panic rooms, where the sensitive souls are safe from the opinions of dissidents. Trigger warnings about certain reading materials or certain lectures. They warn students about evil contents that could endanger inner peace.

The concept “snowflake” comes from Great Britain and — according to an article in the magazine Spectator — means “censor-mad crybabies,” who can’t hack real life outside of protected institutions.

It’s not hard to guess who is the real-life worst nightmare of every snowflake. Definitely the Freddy Krueger of Washington! Against whom only a storm of snowflakes can be of aid. And, because Trump-bashing is as easy as pie, DEMO founder Mareike was quickly invited on a talk show. She could hardly believe her luck. Quickly, she told the world via Instagram:

“Today, as the founder, I’ll be sitting with Maybritt Illner in her talk show (hallelujah, it was really just a little Facebook post). With Peter Altmaier, Jürgen Trittin, Bernhard Mattes and Gabor Steingart. Live from Berlin at 10:15 PM on ZDF. Fingers crossed. Still almost ten hours to go and I’m already nervous.”

And our Mareike really did sit in that illustrious circle around Maybritt’s representative, Mathias Fornoff. Face to face with nothing but winners, who were chewing out that incompetent Trump. For example, the ice ball Jürgen or the Merkel clownfish Peter, who moves from triumph to triumph. Or MorningBriefer, Gabor, who always peers up so saucily from his Handelsblatt column, as if he had a little buzz on. And these great men listened indulgently as Mareike finally came on board and was allowed to speak about the alt-right movement. Which was like the Ku-Klux-Klan, or the Nazis, or something similar.

On TV twice! On Channel One and on ZDF! Can’t get more Warhol than that. Millions know Mareike now. Maybe that much fame will bring a permanent position for the Joan of Arc from Vechta? Hello WDR, NDR, SZ, Zeit?[2] There must at least be some little thing with taz.

At any rate, Mareike owes a lot to the tyrant of D.C. And vice versa! When that crazy monster finally meets his maker, to confess his sins, then he can at least say: Lord, I did a service for the ailing media. And a blond girl from Germany became a star because of me. Or something like that.

10 thoughts on “Führer Trump: A Godsend for the German Intelligentsia”