The graphic below is the English-language version of a campaign poster for the far-left German political party Die Linke: 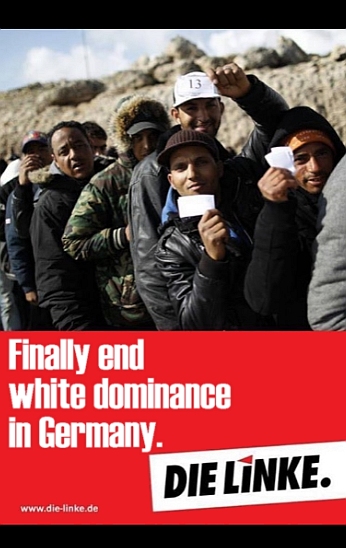 The German original is: Weiße dominanz in Deutschland endlich beenden

Die Linke (The Left) currently holds about 9% of the seats in the Bundestag, and heads the official opposition to the governing “grand coalition” of the Christian Democrats (CDU) and the Social Democrats (SDP).

There’s plenty I could say about this poster, but it would require a lot of bug-eyed hand-waving accompanied by intemperate invective, so I’ll restrain myself.

Suffice it to say that here we have a major political party in Germany advocating actual genocide. However, since it only involves the eradication of white people, no one minds. In fact, I would expect a similar slogan to win a lot of support at the United Nations.

Hat tip: Steen. Thanks to Nash Montana for helping formulate the exact wording of the translation.