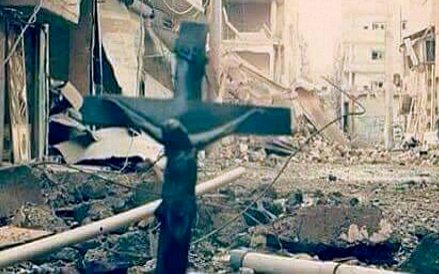 The following text contains excerpts from an interview with a Flemish priest who lives in Syria. He maintains that, based on his own personal experience, the coverage of the “civil war” in Syria by the Western media is a lie.

Many thanks to SimonXML for translating this piece from AD.nl:

“Putin and Assad saved my life”

Father Daniel: The Flemish priest Daniel Maes (78) lives in Syria, in the sixth-century Mar Yakub monastery in the town of Qara, 90 kilometers north of the capital Damascus. Here he has witnessed the civil war. According to Father Daniel none of the Western coverage of the conflict in Syria is true. “The Americans and their allies want to destroy this country.”

You are very critical of the reporting from Syria. What is it that annoys you?

“The idea that there has been a popular uprising against President Assad is completely wrong. I’ve been in Qara since 2010 and have seen firsthand how agitators from outside Syria organized protests against the government and recruited young people. Those images were published by Al Jazeera to give the impression that a rebellion was going on here. There were murders committed by foreign terrorists in the Sunni and Christian communities in an effort to sow religious and ethnic discord among the Syrian people. While in my experience the Syrian people were actually very united.”

“Before the war, this was a harmonious country: a secular state in which different religious communities lived side by side peacefully. There was hardly any poverty, education was free, health care was good. It was just not possible to freely express your political views. But that didn’t bother most people.”

Sister Agnès-Mariam, the Lebanese-French prioress of your Mar Yakub (Saint Jacob) monastery, is accused of siding with the regime. She has friends at the highest level.

“Sister Agnès-Mariam helps the population: she recently opened a soup kitchen in Aleppo where, five times a week, 25,000 meals are prepared. Look, it’s a miracle that we are still alive. That we owe to the government army of Assad and Vladimir Putin because he decided to intervene when the rebels threatened to take power.

“When thousands of terrorists settled in Qara we were in fear of our lives. They came from the Gulf States, Saudi Arabia, Europe, Turkey, Libya. Many Chechens. They formed a foreign occupation force, all allied to al Qaeda and its splinter groups. Armed to the teeth by the West and its allies and huge funding. They literally said: ‘This land now belongs to us.’ They were often on drugs, they fought each other, in the evening they blasted away with their guns at random. We had to keep hiding away in the crypts of the monastery. When the army chased them away, everybody was happy: the Syrian citizens, those who hate foreign rebels and us because the peace returned.”

You say: the Syrian army protects citizens while there are all sorts of messages about war crimes committed by Assad’s forces, such as the bombings with barrel bombs.

“Don’t you realize that the media coverage of Syria is the greatest media lie of this age? Pure nonsense is being told about Aleppo: it was the rebels doing the looting and killing. Do you think the people are stupid? Do you think these people are forced to cheer for Assad and Putin? It’s the work of the Americans because of the pipelines and raw materials in this region and to oppose Putin.

“And Saudi Arabia and Qatar want to establish a Sunni state in Syria, without religious freedom. So, Assad must go. You know: when the Syrian army was preparing for the battle for Aleppo, Muslim soldiers came to me to be blessed. There is no problem between ordinary Muslims and Christians. It’s the radical Islamists, rebels sponsored by the West who want to massacre us. They are all al-Qaeda and IS. There are no more moderate fighters.

“It’s the radical rebels sponsored by the West who want to massacre us.”

You once called Hillary Clinton “a she-devil in holy water” because as secretary of state she incited the conflict.

“I am happy about Trump. He sees what every normal person understands: that the United States should stop undermining countries that possess raw materials. The pursuit of a unipolar world by the Americans is the biggest problem. And Trump understands that radical Islam is a bigger threat than Russia.

“What do I care if he occasionally takes off his pants? If Trump implements geopolitics like he promises, then the future looks positive. Then it comes down to an agreement with Putin. And hopefully there will be a solution for Syria, and peace will return.”

You understand that your analysis is controversial and will draw a lot of criticism?

“I speak from personal observation. And nobody has to believe me, right? But I know one thing: with their coverage, the media can contribute to the massacre of the Syrian people, or they can help the Syrians. Unfortunately, there are too many journalist who are opportunists and have no integrity.”

14 thoughts on ““Putin and Assad Saved my Life””