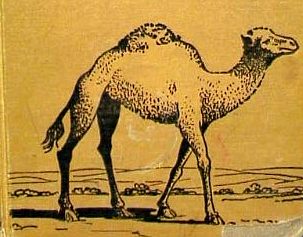 There is NO WORD that this is a satirical article. I read every single reader comment and could not detect that this is not true, that it’s all just satire. So take it with a grain of… whatever. It may be true, or not.

Actually, I’ve seen this story elsewhere, including Breitbart. However, since both PI and Breitbart are well-known “fake news” sites, caveat emptor, y’all…

Sweden: Camels as an integration aid

Can the humanitarian power-state Sweden avoid collapse with the help of camels? In proportion to the number of its citizens, no country has taken in so many illegal migrants and asylum seekers as Sweden. Since 2005, between 50,000 to 100,000 people have immigrated year by year, mostly from countries like Iraq, Somalia, Eritrea and Afghanistan. In the former Nordic welfare state Folkhemmet, which used to be a model example, violence is rampant. Sweden is confronted more and more with a massive surge of crime committed by immigrants.

In the meantime Sweden has 55 “no-go zones”. Multikulti has failed. Back in 2016 a large camel farm in the almost Swede-free district of Angered in the city of Göteborg (Gothenburg) was established that was supposed to be an integration project to bring the country back onto a “winning track”.

The city of Göteborg and other political entities had already paid a million kroner for the project, although they hadn’t yet acquired a building permit. In the course of the year the city paid another 500,000 kroner of integration aid (presumably for the integration of camels?).

The project’s initiator, Géza Nagy, believes that it would support integration; furthermore it would create jobs for twenty people. “We have people from Somalia and from the Middle East in our association that have comprehensive knowledge of camel husbandry. They need to further educate and investigate how one can breed camels in a Nordic region. The largest source of income would be tourism. There is a large interest in camels in Sweden and elsewhere. We expect tourists from the whole world, even from Japan and China,” said Géza Nagy. He also mentions other plans to further income: “We think that Volvo and other companies could photograph their products with camels. We could also hold fashion shows and sell various camel products.”

And now, according to the operator of the future camel center, two million more kroner are needed and the — still — missing building permit in order to kick off the project. At least 1,500 liters of camel milk has been imported already and sold to customers via illegal advertising. Just as in a banana republic, the advertisement promised the product to be a cure for autism, tuberculosis, diabetes, liver disease and cancer. In Sweden it is not permitted to advertise for medicinally effective nutrition if it isn’t approved as a pharmaceutical drug. “As far as I know, camel milk is not an approved medicine,” says Jenny Johansson, food controller with the NFA.

An advertisement for the healing effect of camel urine might possibly do more for integration into Swedish society, and could create a few more jobs. After all it is recommended by the prophet (Bukhari 8:72:794):

The prophet ordered them to go to the (herd of milch) camels of charity and to drink their milk and urine (as a medicine).

13 thoughts on “A Camel Caravan to Göteborg”