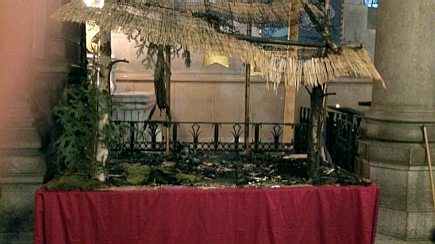 The crèche in a French cathedral was set on fire last Friday night, largely destroying it. As the bishop responsible for the cathedral put it, “silly youngsters” may have been at fault.

Many thanks to Ava Lon for translating this report from France Bleu:

Saint-Etienne: Crèche of the St. Charles Cathedral burned down

Arson destroyed the Christmas crèche of the Cathedral in Saint-Etienne on Friday night. The flames were partially extinguished with the holy water.

It was obviously a deliberate fire that broke out this Friday afternoon in the crèche of the Cathedral of Saint Charles. The incident took place between 5:45 pm and 6:00 pm precisely, before the service at two locations in the cathedral. One or more individuals set fire to the Christmas crib. The faithful present managed to extinguish the flames with water from the holy water font. Another fire was lit under the St. Mary chapel.

This Saturday morning, alerted by social networks, many parishioners came to examine the damage. The crèche was largely destroyed, and some of the figures were broken and charred. Muslims, shocked by the news, came spontaneously to offer their help to clean. Although upset, the sacristan of the cathedral does not want to succumb to despair.

“I will immediately put the figurines in the middle of the crib with a huge bouquet of roses”.

In a statement, the mayor of the city, Gaël Perdriau, speaks this morning about “the desecration of a place of worship.” Gilles Artigue the borough chairman of the UDI [French political party, center- right, Union of the Democrat and Independents] evokes an “act of vandalism”.

The composed reaction of the Bishop of Saint-Étienne

Monsignor Bataille reacted in a statement this Saturday and in front of the microphones in the afternoon. Far from the expressions of hatred and racism visible on social networks, the Bishop of Saint-Étienne wished to soothe emotions:

“The gesture is painful but the act itself is quite limited in the sense that it is just the crib and the figures. It is the symbol of the crib which is particularly strong for us Christians at this time of Christmas. This may well be an act of silly youngsters, as often happens, and then the nursery is a bit tempting: there is straw, so we are going to set it on fire. Last year in my previous diocese we had the same situation… Perhaps a malicious act, a little more serious? It’s going to be up to the police to define it, maybe with the cameras. In any case, it attracts attention, because there is this sensitivity in our country at this time, but concerning motivation, I am not sure that the act has such a weight.”

14 thoughts on “The Ashes of the Nativity”