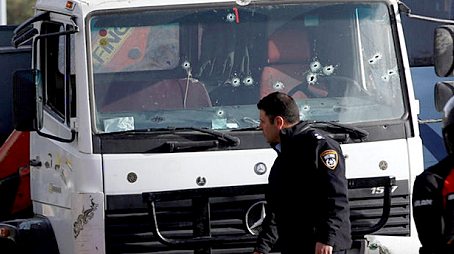 It has now become a familiar image in the Western media: a large motionless truck sitting slightly askew, wheels up over the curb, with bullet holes in the windshield and damage to grill and bumper. The languages on the nearby signs vary, as do the license plates and the insignia on the uniforms of the police and soldiers. But it’s roughly the same picture in each case: the aftermath of the Truck Jihad.

And so it was yesterday with the Palestinian truck driver in Jerusalem, who killed four Israeli soldiers and wounded a number of others before being shot to death by soldiers.

Our Israeli correspondent MC sends this brief note about what happened:

As you are probably aware, there was a truck ramming yesterday on the Tyalit overlooking Jerusalem proper.

The media and other sites are speculating as to why many of the soldiers ran away, and this is a bit unfair, for reasons I will explain.

The boys and girls leave High School at the end of the summer term, and for the next few months are inducted into IDF basic training. They do a lot of activities during basic training, particularly Israeli and military history, and they travel around the country to familiarize themselves with the terrain. During this time they are issued with an M16 rifle which they have to have with them all the time, but are not issued ammunition or magazines except for actual weapons training.

They are in ‘sections’ each with two or three ‘sergeants’, and the sergeants have live weapons, of course.

I would think that what the video is showing is these unarmed ‘cadets’ being told to get out of Dodge at the double, whilst the sergeants lock ‘n’ load. You can see one young soldier getting mags out of her pack.

Given that the victims themselves were in their twenties, they would have been the officers and sergeants who were last off the bus.

The recent prosecution of the young soldier for shooting a supposedly ‘incapacitated’ terrorist has not helped this kind of situation. Like the Japanese in WW2, there is no such thing as an ‘incapacitated’ Palestinian terrorist — they are dangerous to all those around them, even whilst supposedly wounded, and will happily lash out and kill the medics trying to care for them.

B’tsalem (‘in the picture’), an extreme left NGO, ‘just happened’ to be there with a camera, and the then Defence Minister panicked and accused the soldier of murder. It took eight months for the court to make a decision…

It could happen anytime, anywhere, worldwide. Islam is sick and revolting, and revels in the untimely deaths of these young people.

12 thoughts on “The Truck Jihad in Jerusalem”