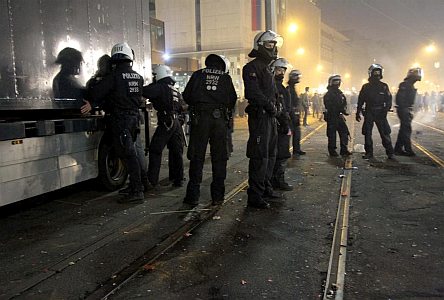 Egri Nök has translated three articles about the events on New Year’s Eve (Silvesternacht) in Germany. The first is from Frankfurter Rundschau:

Amnesty International now demands an investigation into the Cologne Police operation on Silvester Night. The proceeding must be critically investigated by an independent authority.

“Hundreds of people were, only because of their factual or assumed northern African background, bottled up and screened,” Amnesty expert Alexander Bosch said in Berlin on Monday. The most important decisive criteria for the police was the characteristic of the assumed background, Bosch explains, and concludes: “So the operation of the Cologne Police is a clear case of racial profiling.”

The organization’s expert for police and anti-racism stressed that maintaining public order was an important task for the police. The officers fulfilled this by their increased presence, “to prevent a repetition of the inhuman assaults of Silvester 2015.” But the Cologne Police ignored their duty to protect people from discrimination.

Their proceedings must now be critically investigated into by an independent authority, Bosch demands. “Racial profiling is a human rights violation and not an adequate means of the rule of law to reinstall public security,” he said. Racial profiling means that people are controlled because of their appearance, and their thereby assumed background. On Silvester Night, the Cologne police mainly screened Northern Africans and in part retained them. (epd)

The second article concerns Silvesternacht in Dortmund, and is from Wochenblick:

Silvester in Dortmund: “Allahu Akhbar” and a church on fire

A mob of more than 1,000 men allegedly fired pyrotechnics at police. Syrians shouted the Islamic battle cry “Allahu Akhbar”, and the fire brigade had to extinguish a burning church. “Essentially, from the viewpoint of the City of Dortmund, it was a normal Silvester night for Dortmund,” a municipal spokesman said on Sunday morning.

Ruhr Nachrichten, who reported with a live ticker about Silvester Night in Dortmund, wrote at 11:28pm: “Downtown, according to the police, there are strikingly many young men from Northern African countries on the way. At the main train station, dismissals have already been pronounced. Individual drunk men behaved aggressively towards the police and were sent away.”

Purposefully firing at the police

Around midnight, an escalation of the situation was threatening: “From 11:45pm on, at least 1,000 mainly young men gathered at Leeds Square in downtown Dortmund. Risky handling of pyrotechnics was repeatedly observed. Several unidentified persons threw firecrackers at the policemen and fired pyrotechnics into the crowd, in which there were a few families with children. The police asked the crowd not to fire firecrackers and New Year’s rockets into the crowd of people.” The mob of “at least 1,000 mainly young men” primarily consisted of migrants, as the Photo Gallery of the Ruhr Nachrichten shows. These people purposefully threw firecrackers at the police forces, WDR reports.

Ruhr Nachrichten only casually mentions that the Reinoldi church was fired at with New Year’s rockets, and that the fire brigades had to intervene: “At Leeds Square, the fireworks lasted for a good 45 minutes, even though the burning of pyrotechnics in the immediate vicinity of churches is prohibited. The Reinoldi Church is situated there. With a turntable ladder, the firemen had to push forward from Klepping Street to the roof of the church. A New Year’s rocket had set the safety net of a scaffolding on fire.”

The Ruhr Nachrichten struggles not to make an issue of it: “A small fire, which was quickly extinguished.” Internet-users are upset, one example of criticism: “Each fire is a small fire initially. This turns into a large fire, if not quickly extinguished! How can one sugarcoat arson of a church like this…”

Ruhr Nachrichten also documents the “Allahu Akhbar” chants of hundreds of men. Text in the video: “Syrians celebrate the ceasefire in their country.” The police, who had to wear security equipment and helmets at this celebration, might have viewed the situation a bit differently. The chant “Allahu Akhbar” is mainly known in Europe was the battle cry of Islamic terrorists. Accordingly, the attacker in Munich, the Ax-Terrorist of Würzburg, and the priest-murderers of France allegedly chanted “Allahu Akhbar” before they killed people.

The final article is from Focus.de:

Not just Cologne: In other towns, suspicious groups assembled, too

Downtown Cologne resembled a police stronghold: Initially, there were 1,500 officers deployed. Due to the high influx of aggressive young men, they called for reinforcements, so that the number ultimately increased to 1,700.
Police screened the identities of 650 persons. Almost exclusively they were North Africans. The police take it that it was mainly the clientele of last year, who appeared particularly ready to use violence.

Also, in other major German towns the phenomenon could be observed: In Hamburg and Hannover, according to the police, aggressive North Africans attracted negative attention. In Frankfurt police counted up to 1,900 persons who arrived in small groups, but also in towns like Essen, Düsseldorf and Dortmund plenty of people gathered. As Die Welt reports, it is unclear in how far these gatherings were organized.

The main objective was to avoid incidents like the hundreds of sexual assaults that took place in 2015. So far, only isolated sexual assaults were reported from several cities. In Hamburg, there were 14 of these incidents, as Bild newspaper reports. The perpetrators, according to this, were Syrians, Iraqis, Afghans, one Eritrean and one German-Russian.