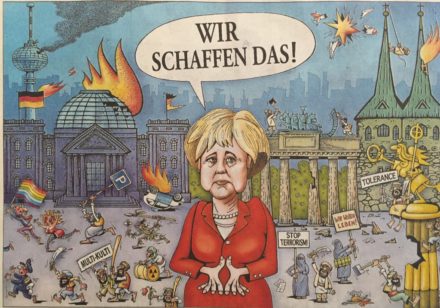 The following essay by Nicolaus Fest was published earlier today at Politically Incorrect. It has been kindly translated by K. from Germany, who includes these notes:

There is one little weakness in this article that critics might latch onto, which is where the author lumps together Muslims, Buddhists and Voodoo cultists. It looks like a slip to the extreme right, but knowing Mr. Fest’s writings, he is well aware of the qualitative differences. It is a pointer at mere quantity in regards to inevitable alienation in a hypothetical situation of inundation with any foreign culture, not just Islam. Slightly clumsy, I believe: he didn’t mean to defame Buddhists. Other than that, he is right on describing the utter nihilism of this leadership and its consequences.

“Where Europe — as […] for the protection of our external borders or regarding migration — is challenged as a whole, it must also find the answer as a whole — no matter how laborious and tough it is.” These were Angela Merkel’s words in her New Year’s address. Yet in actual reality it was the chancellor herself who prevented a response from Europe ‘as a whole’ to the migration crisis, who flouted every one of the other countries’ concerns like a real autocrat, who wanted to protect the external borders as little as the internal ones, and who did not engage in painstaking and tough negotiations about compromises, but tried to blackmail resistant countries with threatened cutbacks in EU monies.

Yet this is not the only shift of perception in the chancellor’s New Year speech. That Merkel sees Germany on top of digitalization, or against all market reality still praises alternative energies as the technology of the future, shows clearly how little the chancellor’s office is a home for reality. One look at the stock charts in wind and solar power would suffice to identify the total failure of these hopes. Not just by chance, the chancellor then mentions the only branch which in this country still shows unbowed growth: health care. Is this supposed to be a sign of hope?

But hope and Merkel hardly go together, anyway, and after this speech even less so. Because the chancellor is obviously not willing to touch on the core question for this country: Who are we, what constitutes this country? All new parties in Europe are based on this question, and also Donald Trump’s election campaign was centered on mostly one thing: About identity, about delineation of the alien, about that which means America beyond the economy, Coca Cola or Google, what keeps it together at the core. It is about positional determination and how to proceed from there. But about all this, Merkel hasn’t a thought to offer.

Or at least nothing which might yield any findings. Indeed she appeals to “cohesion, openness, our democracy” — but to which end or purpose, she remains silent. But what does ‘cohesion’ mean, if not even the chancellor has an idea what you should stick together for? Perhaps for Christianity, enlightenment, humanism, the European culture? Merkel mentions none of these, because every clear commitment immediately would entail the converse argument: For Christianity means against Islam, for enlightenment means against Quran schools and DITIB, for humanism means against the contempt for women, homosexuals and heretics; and for European culture means opposition against all, even peaceful, immigration. Because ‘Multikulti’ and the blending with Muslim or other influences means the end of European culture. Should the Europeans as carriers of a culture disappear, when more and more people see their foundation in the Quran rather than the Bible and Greek philosophy, then Europe as an idea and cultural unit also disappears. And with it all traditions, ideals, and forms it recognized itself in: Bach, Mozart, or Chopin mean as little to Muslims, Buddhists or Voodoo adherents as do Giotto, Vermeer or van Gogh, as Shakespeare, Petrarch or Goethe. Because these Olympians, too, are not theirs.

Yet not a word from Merkel about all this. For her, only ‘openness’ and ‘our democracy’ count. But openness also for full body veiling, Jew-hatred, and child marriages? Or for the price of one’s own pauperization? And what does ‘our democracy’ mean, when this democracy can’t even guarantee internal security, assassins easily elude observation and draw welfare checks under seven identities? Is this the democracy we want? And can a form of state and its representatives be trusted, whose failure is so obvious?

No response here, either. And this should terrify everybody. After Brexit and Trump, after the New Year’s night 2015/16 in Cologne, after the countless rapes and murders, after the isolation in Europe with regard to foreign policy, but most of all after the terror attack in Berlin, the 2017 New Year’s address was by far the most important speech in Merkel’s chancellorship. With it, she would have had to provide reasons for her renewed candidature, give confidence to the country; it was her chance for a new beginning. But instead of taking this chance, Merkel only offered a few words of regret and justification, otherwise: Nothing. No positional determination, no clear announcement, no destination. Merkel does not know what Germany means, what keeps it together, or ‘our democracy’. She does not know which direction the country should take, how it should design its future. And she knows nothing of Europe. To her its culture, despite all Bayreuth visits, is only entertainment, not substance. And just like there, the Tree of Life is but fire wood to her.

23 thoughts on “Merkel’s Message of Horror”