Our German correspondent Egri Nök sends these short observations of the shifts that are occurring in the German press in their coverage of culturally enriched violence and mayhem. Translations of the article mentioned at the end of her remarks (along with several others) will be published in due course. 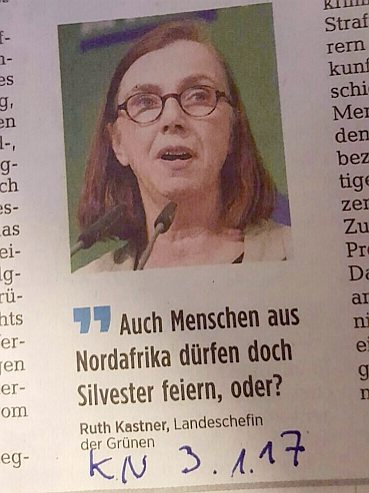 “Are people from Northern Africa not allowed to celebrate the New Year, or what?”

— Ruth Kastner, Chairman of the Greens in Schleswig-Holstein, via the Kieler Nachrichten

If I were to describe what has changed in public (press) discussion from 2016 to 2017, this seems important to me:

All German publishers and journalists must adhere to the “Pressekodex”, a voluntary commitment. This commitment says they are not allowed to mention the national or ethnic background of criminals, unless it is absolutely unavoidable.

2016 saw an intense discussion, under the impact of Cologne and “refugee” criminality, about whether it was permissible under certain conditions not to adhere to this Codex. The codex remains unaltered to this day, however.

Nevertheless, police reports now often explicitly mention the nationality/ethnic background of perpetrators. Some newspapers have followed suit, ignoring the Press Codex, while for others the rule — “if there is no mention that the perpetrator is German, it means he is migrant” — still applies.

Over the last few days, the press began to outright ignore the Codex. Background and nationality are unashamedly discussed. It is as if a switch has been flipped. Decidedly left-leaning magazines such as Der Spiegel, leading politicians of the Greens, and a few of the Social Democrats are mortified.

If you look at this opinion piece from Die Welt, in the end it even admits that Islam has got a plan for the West. This would have been unthinkable just a year ago.

6 thoughts on “Is the Press Codex Losing Its Mojo?”