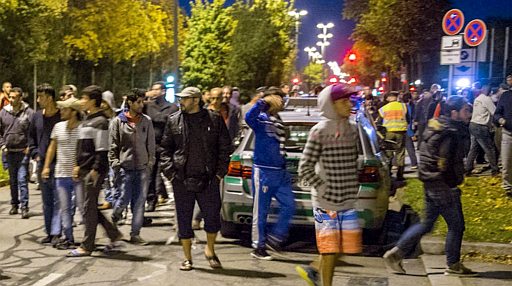 The following piece was condensed from an article in the Polish news portal Dziennik.pl. It describes the experience of a Polish couple who purchased a hotel in Bavaria, only to be forced to sell it to the German government as “refugee” housing.

Many thanks to Ava Lon for reading the original and then writing this précis:

“It used to be paradise, it is a dump today.” What a Germany colonized by refugees really looks like

A fine for hate speech is €1200. This is why Germans are very cautious. They say nothing and watch chaos and trash and the open doors and windows in the refugee centers, while they have to be frugal and heat their homes sparingly.

A year ago there was a map on the internet showing where the shelters are . It was removed. Allegedly it was helpful to PEGIDA.

This is the story of a Polish family who bought a hotel in Bavaria, only to be forced to sell it in order for it to be transformed into a refugee shelter.

In June 2016 there were still no refugees in their former hotel, but it was being watched by an armed guard, after would-be arson attempts. Just like 600 others. It’ll burn like the others and the government knew it ahead of time, and forced the owners to follow very strict anti-fire construction rules (while renovation was underway).

Rumor says PEGIDA people are the ones setting fire to the shelters. Why? Because Bavaria is the most conservative part of Germany.

The new Polish owners of the hotel were accepted as the culturally and ethnically close to Germans, but not 100%, because they spoke German with an accent. So they switched to English. But pressure to use German exclusively was strong from Germans towards foreigners (the “fair game” foreigners that is, the “fair” ones).

When they bought the 200-year-old house in an idyllic Bavarian village, they thought they had found themselves in a paradise. They wanted to turn the house into a hotel, with its own bakery, coffee shop, and a restaurant. It was in a village that was extremely popular with tourists. Now nobody goes there any longer. All the hotels and most large houses were turned into refugees shelters, and arson became a common occurrence. The media don’t mention it, however. Before their very eyes Germany was turning into a Muslim country: thefts, vandalism, and rubbish everywhere became the norm.

When they first began renovation of the largest house in town, they thought it would prosper, but around 2011 Angela Merkel changed her policies.

In 2009 she won the election. In 2010 she said that multi-culti had failed, and in 2011 the German government started actively looking for large houses for immigrants. At first people didn’t understand what was going on, because there were no refugees. The Arab spring was just starting. Nobody had heard anything about any refugees or asylum seekers, and yet the pressure from the government to find and buy real estate for those shelters was enormous. People were wondering what refugees the government even had in mind.

In 2013 protests began in Ukraine, and in 2014 Putin annexed Crimea, so everyone thought Ukrainians might be those famous refugees. Then suddenly the media started broadcasting Merkel’s invitation to literally every single Syrian to come to Germany. At first people didn’t know that it would result in hundreds of thousands of Middle Easterners and Africans (and others) crossing the Mediterranean and arriving via land routes, but then the obvious question arose: how could the German government have known so far in advance about this wave of immigration? That’s when the propaganda started: telling people how wonderful those newcomers were for the people and for the German economy.

Then they got the offer from the government to buy their hotel. They knew other owners of large real estate in the area, and they started hearing from them that they were approached by government (the Office for Refugees [BAMF]). They were told that all large buildings were going to be transformed into refugee homes.

They refused to sell to the government, yet people in the town stopped talking to them, thinking that they had agreed. The town council even voted against such a facility in their town.

At first the family in this story, like there rest of the inhabitants of the area, wanted it to remain a tourist attraction and not a refugee town. They really wanted to live there. It used to be a beautiful, quiet area. They seriously considered talking to the press about the pressures exerted on the local hotel owners by the government.

Then the fear started: in the neighborhood, a hotel like theirs whose owner sold it to the government, was burned down, allegedly by PEGIDA. They understood that they had to leave. Sell and leave. Some people were already leasing their apartments to the government for refugees. The Polish couple wanted at first to sell to a private entrepreneur, but quickly understood that their freshly renovated hotel wasn’t worth more than when they bought it for, a couple of years earlier, dilapidated and uninhabitable. Nobody wanted to buy real estate in a town that already accepted the refugees. Ironically, those refugees wanted to leave, to move to big cities, and they kept running away from rural areas.

They tried to lease, but the agency that contacted them was an agency that had a contract with the government. They were lied to, because they didn’t want that type of deal. When confronted about the lies the agent said that he had a family to feed.

At that point the entire town was under the impression that their hotel had been acquired by the government. Public opinion was fiercely opposed to the refugees. For two years the owners lived under tremendous stress, fearing that the house would be torched. Houses like theirs were being set on fire all over the area. It was taking two years to renovate them, and then they were set on fire yet again. Two police cars were stationed next to their house at all times, without their ever asking for it.

Meanwhile the map showing all the refugee homes in Germany vanished from the internet. A rally was organized to show people’s support for the refugees: the demonstrators, carrying “refugees welcome” posters, were brought in by bus. Children in schools were asked to write refugee-friendly slogans on bed linen and hang those banners outside.

Germans were too afraid to express their true feelings about this accelerated immigration, especially after a fine of €1,200 for hate speech was introduced, but they were shocked by the waste of taxpayers’ money and the impunity granted the newcomers no matter what they did. Littering, throwing food away, stealing (for example, they would take things from the grocery store, but the police wouldn’t come if called: the town would simply reimburse the store using taxpayers’ money), attacking the inhabitants. People were scared to go shopping or walk in the street; women stopped going anywhere alone.

The town was so strongly against their selling the hotel being to the government — and they couldn’t afford to keep it without having any clients — that they had to sell it to the government in the absence of the town mayor, because he wouldn’t sign the papers in the name of the government. Fortunately, his deputy did.

The next day they left.