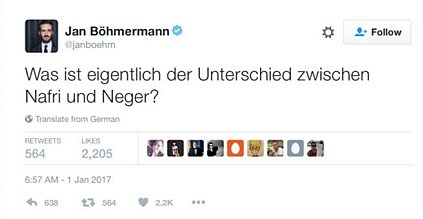 Below is the second in a series of translations by Nash Montana of articles concerning the aftermath of New Year’s Eve in Germany, especially the controversy over “racial profiling” by the police, and the use of the abbreviation “Nafri” for “North African”.

The article refers to the satirist Jan Böhmermann, who, as you may remember, got himself into hot water last spring for writing and performing on television a satirical poem about Turkish President Recep Tayyip Erdogan. The little ditty referred to Mr. Erdogan’s alleged tastes in intimate companionship — specifically, his… ahem… capriphilia. The Turkish government complained vehemently, so Berlin ordered a police investigation into Mr. Böhmermann’s performance, in view of a possible prosecution (see, for example, these reports here and here).

Since Silvesternacht Mr. Böhmermann has taken aim at the police for their “racism”. There’s no telling whether he’s motivated by revenge for what was done to him last spring, or by simple political correctness.

The translated article from FOCUS Online:

Exactly one year after the sexual attacks during Silvester Night of 2015, the Cologne police are again the focus of criticism. This time they are accused of racism. And the satirist Jan Böhmermann has also expressed criticism on Twitter towards the police. Now, Rainer Wendt, the leader and spokesperson for the Police Union, fires back.

Is the term “Nafri” racist or not? Ever since the Cologne police tweeted that they call North African men “Nafris”, fierce discussions have taken place.

The moderator Jan Böhmermann, a satirist, apparently has a clear opinion about this. On Twitter he formulated his critique as a question: “What exactly is the difference between Nafri and Negro?”

Because the Cologne police controlled and targeted hundreds of North African men, and men they perceived as having a North African background last Silvester night, they are now accused of using “Racial Profiling” by the Green Party and the Left.

Rainer Wendt, the spokesman for the German Police Union (DPoIG), now defends these actions in an interview with the NDR: “The police didn’t just pick out these people because of their skin color; there were other contributing factors.” For example the police controlled people because of the way they were acting or because of the things they carried. “The 60-year-old grandma out there wouldn’t have been stopped and controlled because she would give absolutely no reason to suspect her,” said Wendt.

Jan Böhmermann hasn’t got a clue about police work

Concerning Jan Böhmermann’s tweet about the “Nafri” discussion, Wendt shot back directly at the satirist. “Jan Böhmermann hasn’t got a clue about police work. Otherwise he wouldn’t ask such a dumb question,” he said to “Business Insider”.

Furthermore, Wendt defended “Nafri” as a workplace abbreviation among the police that is not meant in a judgmental way.

It is questionable whether this was the last word spoken between Böhmermann and Wendt. In the past Böhmermann had on various occasions taken a shot at Wendt and criticized him, for example that he wasn’t the spokesman for “the” German police union, but for “a” German police union [there are several police unions, at both the federal and state level, in Germany].