As we reported in September of 2015, an immigrant with a megaphone incited the mob and orchestrated the violence at the Serbian-Hungarian border just after the Hungarian government closed the crossings and started building the fence. The Hungarian police issued an announcement asking for citizens’ help finding the ringleaders of the mob, and especially the man with the megaphone.

The poor misguided culture-enricher was eventually located and arrested. His name is Ahmed H., and he was recently tried and sentenced to ten years in prison.

The open-borders crowd is very unhappy with the sentence, and they’re agitating to have it overturned. Many thanks to CrossWare for translating the following article from Napi Migráns (Daily Migrants): 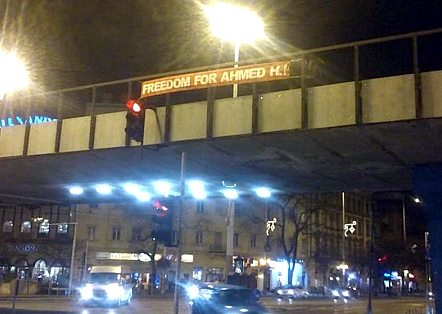 Freedom for Ahmed! — Advertises the sign around the West Train Station overpass

Yes, and this is not in Saudi Arabia (just try it there), but in our little Hungary.

Index [“Index.hu” is a proven Soros funded media outlet — translator] happily presented the great news about the “Freedom for Ahmed H” sign hanging on the West Overpass on Wednesday night. Ahmed H. is the invader who was sentenced on Wednesday to ten years in prison by the court of first instance in Szeged. Index.hu is very sorry for the poor, innocent Syrian refugee…

With the sign, as shown above, Kata Janecskó (author of the article) has deployed all the elements of “MSM fake news”. Let’s look at the article and make a judgment based on that:

“We like Hungary,” he said at Röszke, and the Syrian man with the megaphone got sentenced to ten years in prison!

On their main page the following was included, with this title:

We love this country, said a Syrian man, and received ten years in prison

Does it not break your heart, dear reader? He loves this country, and this garbage court sentenced him to ten years, but he LOVES it. Do you not understand?

He expressed his love by trying to illegally break into the country, attacking the border guards, and inciting his accomplices to do the same, and then he gave an ultimatum to police and threw rocks at them.

And what do we find out from this little title from index.hu? Well, that he was a Syrian, and he had a megaphone, and that was his only sin, while he loves this country… and was yet convicted. An example of those exclusionary xenophobic Hungarians.

By the way: those who put up the sign are also organizing a demonstration on Saturday against the “brutal punishment”. These people of course never protested against the brutal [immigrant] siege.

Amnesty International does not rest, either (naturally also broadcasted by Index.hu): “He is a father, so the judgment must be destroyed!”

“The decision shows the misapplication of the Terrorist Act, and reveals two very disturbing trends, which also reflect the misuse of law and the horrific treatment of refugees and migrants in Hungary,” said Gauri van Gulik, the European director of Amnesty International, who also attended today’s hearing with our colleagues.

“A father was sentenced today to ten years in prison, whose only purpose was to accompany his elderly parents and his family safely to Europe. The rock-throwing and his attempt at crossing the border illegally are not equal to committing a terrorist act, and cannot justify this strict draconian decision. The judgment against Ahmed H. must be overturned at the second level, and he must be set free.”