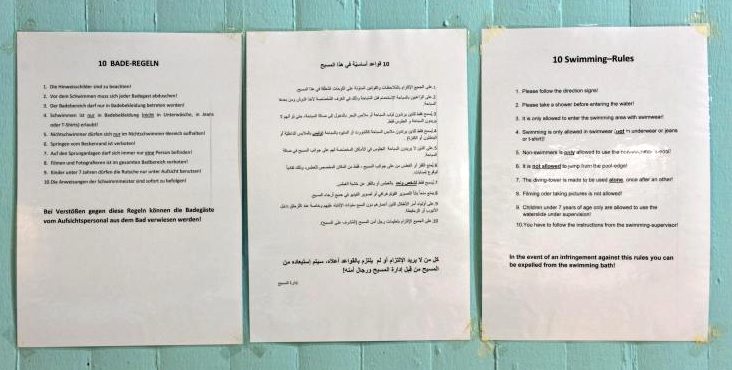 The following article bears some resemblance to the Swedish case reported here a couple of days ago. However, this one is not quite so insane — the “Swedish” perps were released and subsequently sued the state, whereas this New Austrian rascal will remain in custody until his case is retried in the lower court.

But it’s still lunacy. Here in the USA, if a rape victim is underage, he can’t possibly consent, so the issue of consent (or its lack) would never be brought before the court. In this benighted backwater, any sex with a child is rape, period. But Austria is a strange country; they do things differently there.

Many thanks to Nash Montana for translating this article from ORF:

The rape trial against a refugee from Iraq who allegedly sexually molested and raped a ten-year-old boy at the Theresienbad in Vienna has to be repeated.

On Thursday the high court (OGH) partly nullified the first judgment — six years in prison — and ordered a new trial. It was decided there were flaws in the initial discovery, Senate President Thomas Phillipp explained.

While the verdict in regards to severe sexual abuse of a minor were “airtight” — the guilty verdict was confirmed by the OGH in that point and is therefore legally valid — the required finding was not necessarily made that showed evidence of legally defined rape.

According to the OGH, the court should have determined if the offender thought that the victim had given his consent to sexual activity. In other words, if the accused had shown intent to act against the will of the boy. This intent was not sufficiently shown; therefore the OGH nullified the guilty verdict for rape.

The actual rape therefore will be debated separately at the county [local] court. According to the law, the punishment will be nullified, and therefore after the second court process — which will probably not take place before 2017 — the 20-year-old will receive a new sentence. The offender will remain in detention until then.

Boy was pushed into bathroom stall

On December 2 of last year the accused allegedly raped the boy at the Theresienbad in Vienna-Melding. As the trial began last April the offender admitted grabbing the young student by the hand, pushing him into a bathroom cabin, locking the door from the inside, and then molesting the boy.

The accused was immediately arrested at the swimming pool. The boy ran to the pool supervisor who then in turn immediately called the police. During the initial interview with the police, the 20-year-old offender made a confession, and according to the recording, he said that he was “following his appetite”. That he “hadn’t had any sex for four months.” When he was asked by an officer if it wasn’t illegal even in Iraq to have sex with a ten-year-old boy, the refugee answered: “Such a thing is forbidden in every country of the world.”

The very youthful-looking offender had been working as a taxi driver in Iraq. In September of 2013 he married his wife and they had a child shortly thereafter. In August of 2015 he decided to leave Iraq to build a new life for himself and his family.