Four Coptic teenagers in Egypt were given prison sentences for making fun of the Islamic State. They were very fortunate, however — before having to serve their sentences, they escaped and were given religious asylum in Switzerland. I’m not sure they would have been granted asylum in the USA, given the anti-Christian policies of the Obama administration.

The incident described by Dr. Ramelah in this post occurred when the Coptic boys were 15 and 17 years old. This article in The Daily Mail has more. 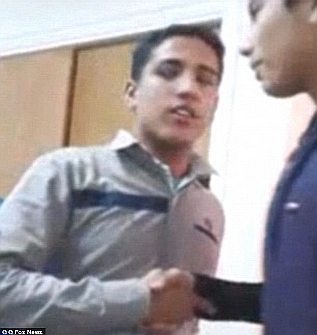 Mocking Islam or mocking the prophet of Islam spells doom. In Egypt you will be arrested, your home and property confiscated, and coerced to “emigrate” from your town. Then count on a five-year prison term. This was exactly the penalty for four Coptic Christian school boys, aged 14 through 17, and their teacher.

Modernity grazed the 7th century when a lost cell phone turned up in the hands of a sectarian street thug ready for Sharia justice against its owner. The sim card showed a video of a 36-second skit mocking ISIS terrorists praying to Allah. Away from home on a school trip, the boys used their teacher’s phone to record the funny scene they acted out, thinking ISIS was fair game and knowing that Islam was not. Unfortunately for them, the cell phone was lost or stolen and missing for a solid year. Found by Muslims who became offended by the “blasphemy”, the Egyptian courts overlooked the violent retaliation by the gang, who were prompted to attack homes and businesses, and instead arrested the boys and their teacher.

On the same day Muslims struck the town, the police were notified and arrested the four Coptic boys and their teacher. Before their convictions by the courts, the Christian blasphemers were forced to apologize. One month later, on May 27, 2015, the boys were released on bail, and February of this year they were sentenced to prison for five years. They were allowed to pay a two thousand pound fee per student to temporarily suspend the verdict’s start date because they were not present at the sentencing.

This last fact was a big factor in reversing their fortunes. The boys were facing the devastation of their remaining adolescence. They would soon be housed behind bars in cells with jihadists, possibly members of the Muslim Brotherhood or worse. The prospect was bleak, but all is well now thanks to anonymous channels.

The hidden hand of a courageous heart behind the scenes knowing the complexity of such matters delivered the four boys from the Egyptian inferno. They were enabled to tackle security to obtain their passports and move through customs bound for Turkey (a country with bad diplomatic relations with Egypt). As tragic, glaring examples of religious tyranny with “refugee” status as defined by the U.N, the boys arrived in Switzerland where their request for religious asylum was granted.

Upon arrival to safety in the West, one of the boys told a news reporter, “There was no reason to be treated like that; it was all a joke, but now we may have an opportunity for a better life.”

Egyptian authorities are alarmed by reactions around the world related to the story and the negative publicity. The state is now bombarded with criticisms of the regime and its court system broadcast by brave media hosts in Egypt. The conversation continues, with some saying the boys were wrong to escape their sentencing; it would have been better for them to respect the courts, honor their country, and serve their time.

Of course the real goal of Sadat and Saudi Arabia is clear; as stated decades earlier, the Middle East must be cleansed of Christians. The question remains: will Islam succeed?

7 thoughts on “If You’re a Copt, Mocking ISIS is the Same as Mocking Islam”