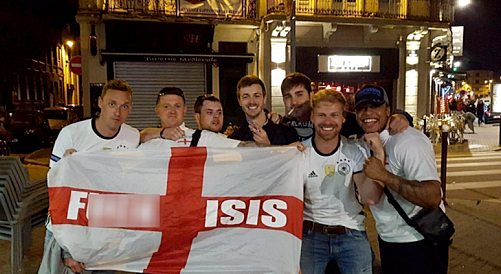 Tommy Robinson has once again come under the scrutiny of the Lidless Eye, a.k.a. the Bedfordshire Police. This time his “crime” was to carry a banner to France for the Euros football match that read ‘F*** ISIS”. Now — despite the fact that ISIS has nothing to do with Islam, as we all know — the police are concerned that Tommy’s actions will “incite racial hatred against Muslims”. 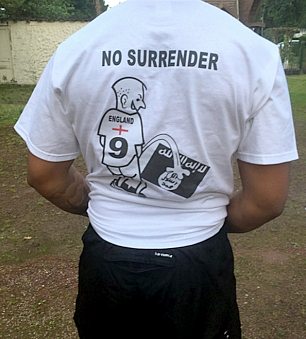 The circumstances of Tommy’s encounter with law enforcement were related to us by a British contact who knows him:

Tommy returned early from the European football cup in France because of his mother’s medical condition. He was in bed when three uniformed policemen burst into his house, scaring his wife and children, to present him with a travel banning order and telling him he was not to leave the country, even though there is absolutely no reason for it. He has appeared in court and is planning an appeal against this ban hopefully next [this] week. The persecution continues!

Below is a press Release from Tommy’s barrister

My Client, known as Tommy Robinson, has been served with an application for a football banning order by Chief Constable of Bedfordshire Police. The main purpose of Bedfordshire Police serving this football banning order was to prevent Tommy Robinson from traveling to France for the Euros. Following an application to the Court, the court has now seen fit to remove that draconian restriction on his liberty.

However Bedfordshire Police persist in making the civil football banning order application, and this application will be heard by the court in September 2016. Tommy Robinson will contest this application.

The mainstay of the application by Bedfordshire Police is that Tommy Robinson, while in France was pictured wearing an Anti ISIS T Shirt, and holding up an English Saint George Cross flag with ‘F*** ISIS’ written across it, and that this was aimed at inciting racial hatred against Muslims. Both I and my client are very concerned that the Chief Constable of Bedfordshire Police and the UK Football Policing Unit have equated Tommy Robinson’s demonstration against a banned extremist terrorist organisation as being the same as showing hatred towards people of the Muslim faith. The Prime Minister David Cameron in his House of Commons speech on 2nd December 2015 referred to the ‘Evil’ of ISIS, and that British Muslims were appalled by ISIS. He further said that the attacks in Syria by the British Military were “far from an attack on Islam, we are engaging in the defence of Islam… failing to act would betray British Muslims”. It now appears that both Bedfordshire Police and the UK Football Policing Unit are linking ISIS to the general Muslim people and population, because it suits their purpose of the campaign of harassment against Tommy Robinson.

I am concerned that this application is brought on the basis of a harassment campaign against Tommy Robinson, such that the Assistant Director of the United Kingdom Football Policing Unit, has become involved and provided a statement to the effect that as Tommy Robinson has a high social media profile, and is associated with Pegida UK this is likely to act as a catalyst for disorder and violence outside of the United Kingdom. This clearly is an attack on Tommy Robinson’s freedom of speech and association, and is in direct contravention of the evidence which the UK Football Policing Unit have that Tommy Robinson travelled to France during the period that the England football team played in Marseille, yet he chose not to travel to Marseille, but instead was in Paris without any incident of violence or disorder.

Tommy Robinson will vigorously defend this application against him. On Bedfordshire Police’s own admission, there is no evidence that Tommy Robinson has been involved in any reported football related disorder for at least the past 5 years.