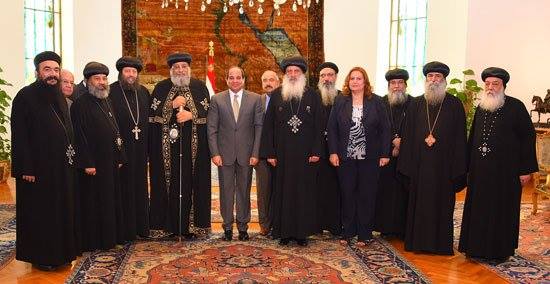 The following article from the German-language Copts Without Borders blog discusses the delicate problem posed by the demonstrations against Egypt organized by Coptic groups in exile. The author’s main point is that they, the Copts who stayed behind, must live as dhimmis under Islamic rule; there is no other choice. Copts in the diaspora are asked to consider the strategic ramifications of their protests, since the current Egyptian president has done more to help the Copts than any other president or dictator in recent times.

JLH, who translated the article, includes this note:

As our runaway government greases the skids for ever more Muslim immigrants to enter the country, and turns a blind eye to the pleas of Christian individuals and institutions being plowed into the ground in the Middle East, I was struck by the continuing outreach of the “dictator” Al-Sisi to the most endangered of his citizens. And by the tightrope the Copts feel they must walk in an attempt to survive in what was and should still be our highly valued ally.

Polemic on the Demonstrations by Copts in the USA

Egyptian citizens, whatever their religious affiliation, “all have the same rights and duties under the constitution.” And the Egyptian Christians have “displayed prudence and a spirit for the homeland” in the way in which they have reacted to sufferings and provocations in past years. They have remained sensibly united against the attacks of those who “want to use religion to sow discord and spread extremist ideas.”

These are the significant thoughts expressed by Egyptian President Abdel Fatah al-Sisi during his meeting with Coptic Orthodox Patriarch Tawadros II, as he received him in the presidential palace, together with a delegation of several bishops from the synods of the church.

Al-Sisi emphasized the value of brotherliness between Christians and Muslims in Egypt by his positive evaluation of initiatives undertaken in the context of the Egyptian Family House. This so-named House of the Egyptian Family is an inter-religious organ for making connections that had arisen several years ago as an instrument for prevention and mitigation of sectarian contrasts.

However, the public demonstrations by several groups of the Coptic diaspora still trigger polemics, for instance those in recent days in Washington in front of the White House that protested against acts of violence against Christians in Egypt. Speakers for the Coptic Orthodox patriarchate did not wish to comment officially on these demonstrations. But recently there have been warnings from the patriarchate of their possible manipulation, as well as the warning against mobilizing public campaigns abroad which could be seen as “attempts at intervention” by foreign organizations and groups in Egypt’s domestic affairs.

The Egyptian writer Michael Fahmy spoke out sharply against such demonstrations organized by members of the Coptic Egyptian diaspora. He labeled them “stupid or treasonous” actions instigated by small groups. He also emphasized that only the Egyptian state can protect the Copts from acts of violence; that these groups are capable of protecting neither the militant Coptic-Orthodox diaspora nor the Copts now sitting in the Egyptian parliament.

It may seem odd that the official Coptic Church is speaking against demonstrations abroad for Christians in Egypt. But the fact remains that only the Egyptian state — which is an Islamic one — can protect the Coptic Church and its faithful after a fashion, even though, after a period of relative calm, Islamic attacks on Copts in Egypt have increased. But the Copts’ overall situation has improved recently.

The Church must protect its members and make these statements officially. This induces a precarious situation. On the one hand, Christians abroad should not be indifferent to this imposed dhimmi status in Islamic countries, as in Egypt. On the other hand, these protests abroad put pressure on the recently moderate Islamic President Al-Sisi, who had the courage to criticize his own religion.

The churches in Islamic countries that are under increasing pressure in Iraq and Syria, where an extensive exodus of Christian life occurred and is still occurring, should be grateful for the involvement of the still-too-few Christians abroad. Because it is not to be taken for granted. In contrast to Iraq and Syria, where Christians have lost everything and the priests there rightly speak out against the Islamic reign of violence in these countries, the military in Egypt has succeeded in halting the “Arab Spring,” which pummeled especially the Christians and Yazidis. Despite the discrimination, the Copts there are relatively secure and protected. If the Arab Spring had swept across Egypt, there would be no more Copts in Egypt, as there are none in Iraq.

Such demonstrations would only be helpful in the event of the complete collapse of Islam in the Turkish-Arabic-North African area. But that is nowhere in sight. On the contrary, we are undergoing a worldwide radicalization of Islam. As a blog, we thank the demonstrators in the USA and elsewhere in the diaspora for their commitment and ask them not to slacken. But we also ask the Copts in the diaspora to have some consideration for the Copts who must live in Egypt. They could make posters repeating President Al-Sisi’s criticism delivered to the religious leaders in Al-Azhar University when he visited there on taking office. That would even be useful.

This dilemma could more easily be resolved if the Coptic groups abroad would exclusively oppose Islamic acts of violence in Egypt, which is also the Egyptian president’s point of attack. Al-Sisi has proceeded strenuously against the Muslim Brotherhood, and that has also provided relief for the Copts. Yet this, or other radical groups still practice violence against Copts. Europe too, is learning painfully how difficult it is to root out nests of Islamic radicals.

Throwing the baby out with the bath would mean losing everything in Egypt, as the Christians suffered and are still suffering in Syria and Iraq. This has unfortunately proven to be true. The Christian exodus from Iraq and Syria is taking place unnoticed where the Copts are demonstrating, in the USA, in Europe and in western churches. If this were not the case, there would have been, for decades now, much stronger support for fellow Christians and against the persecution of Christians. They have shown that their solidarity with their co-religionists is less than half-hearted. Nonetheless, we thank all those people in church and country who have continued to help to raise the awareness of the great tragedy of contemporary Christian persecution. This task has received too little support from the general population and the Church.

Should the Islamic revolution of the Arab Spring be victorious in Egypt, this state would sink into Islamic chaos like Libya, Iraq and Syria. Christians would be the big losers and would soon flee or be murdered. That is why the Coptic Church must maintain a good relationship with the Egyptian state, which can be so much easier with a president who is so critical of his own religion. It could even happen that a model may arise in Egypt of how Muslims and Christians can better coexist. Even if we of the West do not care to hear it, the Islamic states will never produce a democracy.

The path out of servitude for Christians in Islamic lands is stony and difficult and must be accompanied by tactical measures on the part of the affected churches. Some may find fault, but, under the present circumstances, it is the only practical survival strategy under dhimmi subjection.

We must trust in Jesus Christ, who has not yet abandoned the Coptic Church. We beseech Him to protect Christians in Iraq and Syria, strengthen them in number and in faith. Let us not falter in prayer for persecuted Christians and other persecuted minorities.