As reported earlier this evening, an underage Afghan immigrant inexplicably ran amok on a train in Bavaria, attacking a number of fellow passengers with an axe and a knife. After the train stopped he ran away, and was eventually shot dead by police.

The following account aired on ARD, the German public broadcaster, while the news was still breaking. Many thanks to Egri Nök for the translation, and to Vlad Tepes for the subtitling:

Below is a more detailed report on the incident from the Frankfurter Allgemeine Zeitung, also translated by Egri Nök:

Near Würzburg, a man with an axe and a knife attacked several travellers in a train and wounded them critically. According to the Bavarian Interior Ministry, the attacker is a 17-year-old Afghan. 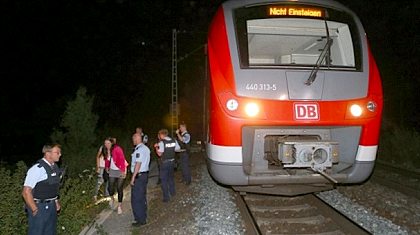 [Photo caption: Police forces at the commuter train in Würzburg. After the attack on passengers, the attacker was shot by police]

On a commuter train near Würzburg, a man attacked several commuters and wounded three of them critically. He subsequently was shot by police. This was confirmed by a spokesman for the Bavarian Interior Ministry late Monday evening in Munich. Another person was lightly injured, a police spokesman said. A further fourteen affected people who had been in the train remained uninjured, according to his account.

A spokesman the Bavarian Interior Ministry said that the attacker was a 17-year-old Afghan citizen. In an interview with Bayerischer Rundfunk [Bavarian Radio], Interior Minister Joachim Herrmann confirmed the information regarding the underage attacker. Relying on eyewitnesses, the police were starting from the premise of a lone perpetrator, said Herrmann. He had come to Germany without parents, had been living for a while in the parish of Würzburg, in an institution in Ochsenfurt. Most recently, he had been living with a foster family.

Answering the question whether there was the possibility of an Islamist background, Herrmann said there had allegedly been “a yell”.

“According to my information there is an account reporting a cry of ‘Allahu Akbar’”, the Interior Minister said in the Nachtmagazin [Night Magazine] of ARD [public TV]. This needed to be verified. “Apart from that, according to my information, the passengers on the train did not note any specific Islamist background or anything like that,” Herrmann said. The investigations into the milieu of the perpetrator should be decisive, in his view. 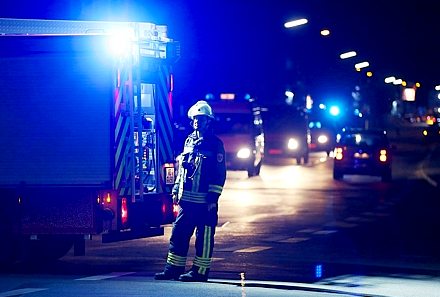 As the police reported Monday evening in Würzburg, the perpetrator attacked the commuters with an axe and a knife. The train was stopped between stations in Heidingsfeld, where the perpetrator fled from the train and shortly thereafter was shot by police. A special forces detachment had coincidentally been nearby and could immediately begin pursuing the fleeing perpetrator.

The train had been on its way from Treuchtlingen to Würzburg. Railway traffic between Würzburg and Ansbach is suspended, Deutsche Bahn report. According to “Main Post”, substitute busses have been running between Ochsenfurt and the main train station in Würzburg since 10:30 pm.