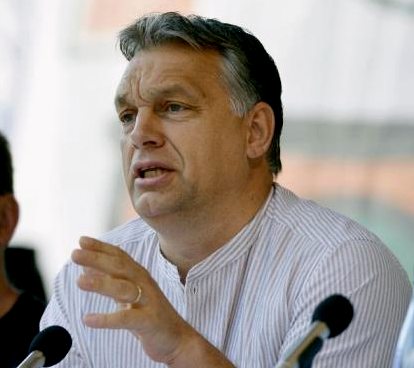 On May 20 Hungarian Prime Minister Viktor Orbán was interviewed on the Kossuth Rádió programme “180 Minutes”. Below are excerpts from the official translation of Mr. Orbán’s remarks:

Last September Hungary decided to turn to the European Court. If the Court rules in favour of the Hungarian government — and also the Slovak government, which is party to the suit — this will mean that the referendum will lose some of its meaning, as obviously no decision contrary to the ruling will be adopted in the future.

This is only partly true, because the challenge we have filed with the Court relates to the past. In the past a decision was adopted. We believe that this decision is contrary to European law and the treaties, and that it contains procedural errors. This is why we are contesting it.

It would make the settlement of migrants in Hungary compulsory, up to a certain number. We reject this. This is the past. The future, however, is much more dangerous than this.

The future is not about one specific decision, with which they want to force a certain number of people on us whom they want us to live together with, against our will: it is about setting up a permanent distribution mechanism. This means that if they let in or bring in migrants to Europe on a permanent and ongoing basis — mostly from the Muslim world — they will use a mechanism to distribute them among the Member States. So this is not about a one-off case, but about our future.

Here I do not want to throw statistics about: I suggest that, if they are able to, people should visit some cities in Western Europe, they should walk down a major street and take a look at life over there. If they have memories of those cities from the past, they will see that in the past ten or twenty years life there has changed substantially. And if we allow this, in ten or twenty years we will not recognise Budapest, and we will not recognise our cities. And parents should imagine their children asking them fifteen years from now why this was allowed to happen to our country.

Therefore I believe we must be firm in preserving the country’s culture, we must preserve its security, and we must also preserve its cultural homogeneity. This is an enormous advantage. The fact that we are the way we are is based on the traditions of a thousand years, on principles and day-to-day customs which we continue to uphold and do not question, because for us they are natural. They provide an enormous competitive advantage, and create a sense of cultural homeland which is no longer present in many European cities.

But this core Europe in your interpretation — the Central European part — is the target of a lot of criticisms and attacks. We are familiar with the criticisms of Hungary, but the Poles, for instance, have been given until Monday to explain in Brussels whether or not the criticisms about the rule of law in their country are well-founded.

First of all, I believe that the Poles are being treated unfairly in Brussels. Brussels is not taking a fair position. I think that at times Brussels insults the Polish people, and the Polish people should be paid more respect. Theirs is a great nation. It is a people and a country four times — at least four times — the size of Hungary. So it has some weight. It has a monumental history.

We are talking about a freedom-fighting people who have probably shed more blood, lost more lives and made more sacrifices for their freedom than many other European nations, and who now hold their fate in their own hands. Therefore I believe that the action being taken against them is unfair.

At the same time, they are a strong country. Hungary is a country of ten million. We account for 0.2 per cent of the world’s population. The situation with the Poles is different, with a large emigrant community in the US, and a strong economy. I would not pick a fight with the Poles; in Brussels they may see themselves as big boys, but they will never win this battle against the Poles.

It is not only Brussels politicians who see themselves as big boys, but also those in the United States. In the words of Bill Clinton, husband of the current presidential candidate, Poland and Hungary “have now decided that this democracy is too much trouble, and they want Putin-like leadership”, and that they want to have authoritarian dictatorships, and to “keep the foreigners out”. What he said is obviously understandable in the context of the campaign over there, but it is especially intriguing, as Hillary Clinton has made it clear that she intends to give her husband an important position in her new administration. Does this mean that we can more or less gauge the new US leadership’s policy on Hungary and Poland?

I think that we have been cited in this affair in the way that Pontius Pilate is mentioned in the Christian creed. The best way to understand what was said and why is to look at the US election campaign. Despite this, a lack of respect is still a lack of respect, and an insult is still an insult. This is not the custom in Europe, where countries and their leaders do not insult each other. So both the Hungarians and the Poles deserve more respect from the former and current leaders of the United States.

I like what the President of the Polish governing party has said. It may sound rude, but mentioning the need for medical treatment has lifted many Hungarian hearts. If we were bigger than we are, perhaps we would also be saying things like this. But what is permissible for Jove is not permissible for an ox, so I shall not repeat the remark of the President of the governing Polish party.

Instead I’ll draw your attention to another aspect. Outside the context of the American campaign, the comments made about Hungary and Poland — and Central Europe in general — have a political content. These are not mere slips of the tongue, and these comments and statements have multiplied since the migrant crisis. We all know that behind the leaders of the Democratic Party we need to recognise the figure of George Soros.

George Soros has published a comprehensive six-point plan promoting the movement of migrants into Europe, in which he has declared that at least one million Muslims should be let into Europe every year. According to this they must be given safe passage, and Europe should be pleased to receive such an opportunity, rather than try to resist it. He also said that this will cost a lot of money, and he will provide the credit needed. So here, in Central Europe, there is a background power which can be linked to the name of George Soros. He is one of the most important sponsors of the Democratic Party in the United States, and therefore I must say that, in this instance, the mouth belongs to Clinton, but the voice belongs to George Soros.

And as Hungary is where it is geographically, and as it wants to protect its national sovereignty and its security, we constitute an obstacle to this Soros-inspired American plan. It will not be implemented here as long as Hungary has a government of national interest. So behind these American “slips of the tongue”, we must also see some more serious correlations.

But if there is this correlation in the background, this will result in a weaker Europe. Why would this be in the interest of the United States?

I would not go into conspiracy theories — I will only state the facts. The strength of the Hungarian opposition cannot match the influence of the Hungarian organisations financed by George Soros. This is a background power. No one elected them, yet they continuously seek political influence. And, within the natural rules of a democracy, they exert pressure on political decision-making. But the money is channelled to these organisations — into these public forums — mostly through George Soros’s network of background power.

This not only happens in Hungary, but is a recognised phenomenon in other Central European countries as well. We do not usually talk about it, and on this occasion, too, it was brought up by President Clinton and not by us. Therefore I believe that this is a good opportunity to finally talk about this issue, the issue of whom Americans finance in Hungary and why, and what influence they are trying to exert here.

I think that the clue lies in the fact that there are Americans — I would not say the United States, because it is a big country with many power groupings — who think that it would be good for Europe if millions or tens of millions of Muslims came to the continent. George Soros supports this view with arguments based on human rights considerations. Hungary is opposed to this.

And, I repeat, Hungary is not a significant country in terms of size. But its location means that once every thirty years it finds itself at the centre of world political attention. This was the case in 1956. The Russians withdrew from Vienna, from Austria, in ‘55, and there was a revolution here in ‘56, because we were on the periphery of the Soviet empire. In ‘89, around the time of German reunification, we once again became a key country because of the German refugees. And now we have once more become a key country, as we have stopped the flow of migrants.

We did not volunteer for these roles — not once. Our geographical location pushed us into this position on the stage of world politics. This is the situation now, we must stand our ground here, and therefore we are now receiving more attention. But this should not frighten us. We should not be afraid of the limelight and hostile voices in the audience, because — and I repeat — if we yield to the pressure, in fifteen to twenty years from now we will not recognise our own country. Resisting this involves responsibility.

There’s more worth reading at the Hungarian government website.

13 thoughts on “Viktor Orbán: “The Mouth of Clinton, The Voice of George Soros””