Final update: We have a winner. 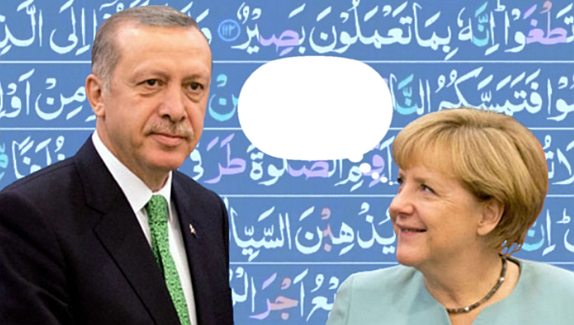 We all know it was love at first sight. But what was Mädchen Angela thinking the when her heart first throbbed for Recep “Papa Goat” Erdogan?

Take a crack at it, boys and girls. If your caption is chosen, you’ll win an additional 72 black-eyed virgins when you enter Jannah — that is, you’ll be eligible for a full gross! Or 144 young boys, fresh as pearls, if such is your taste.

Contest entrants must be 12 years of age or older. No unveiled women are allowed to participate. Employees of the OIC, ISNA, CAIR or any Turkish or German embassies are not eligible to enter.

BTW — the only thing I could think of to put in that balloon was a bunch of red hearts and the words “I want to be his Aisha!”

Note: the original photo had Recep and Angela in exactly those poses. Only the background has been modified.

Update: I just realized that we’re probably going to get a lot of entries, but there will be only one winner (or maybe a winner and a runner-up). So if you want a copy of the image without the balloon, so that you can make your own caption for it, just drop me an email at gatesofvienna (at) chromatism (dot) net, and I’ll send you a PNG file.