…And a couple of runners-up.

Last Friday I made a digital composite image of Turkish President Recep Tayyip Erdogan and German Chancellor Angela Merkel. I modified only the background, and left the two faces as I found them — in other words, the love-struck look on Mrs. Merkel’s face for the dashing, handsome Prince of the East was there in the original.

The picture cried out for a caption — what was Swooning Angela thinking or saying at that moment? So I presented it to our readers and invited their suggestions. The results were even more fun than I expected — there’s been a lot of chuckling and snorting here at Schloss Bodissey for the last two days as the comments came in.

The captions from winner and the runners-up were all too long to display easily in a thought balloon, so I removed that and used a meme caption for each of the three.

The winner is Salome from Australia: 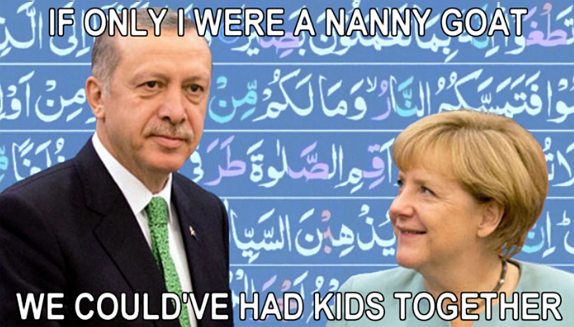 Given her, ah, gender identification, Salome will probably want to claim the young boys fresh as pearls for her prize, and leave the 72 virgins to be divided among the runners-up.

The second-place entry came from The Observer (slightly condensed to make it fit better): 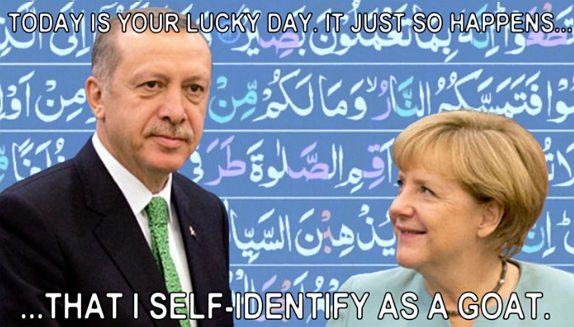 Third prize goes to Bill C. (with “ISIS oil truck” changed to “Scud” in order to save space): 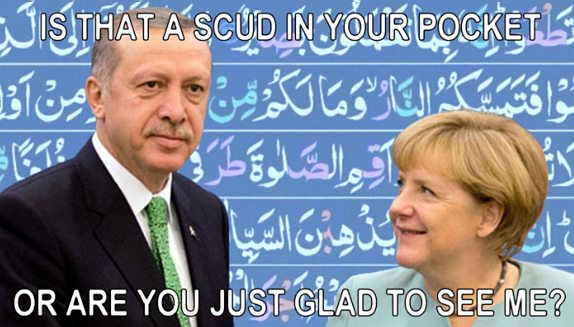 Thanks to everyone for participating. And make sure to keep the Goaty Erdogan jokes coming (so to speak). By summoning the German ambassador and getting a TV comedian investigated, Mr. Erdogan prompted a monumental Streisand Effect that hasn’t even begun to abate.