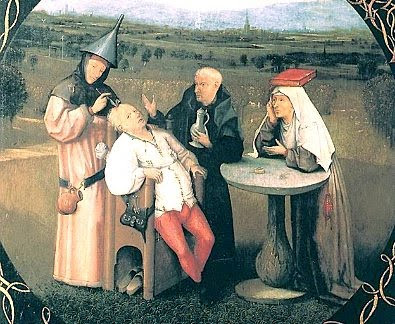 More “youths” in action, this time in Dortmund.

An artist agreed to remove one of his paintings from a public place because some of the culture-enriching youngsters got a bit frisky around it, and others complained. Can’t have that, you know.

The work in question is not the one shown at the top of this post, which is “The Extraction of the Stone of Madness” by Hieronymus Bosch. The painting mentioned in the story is ugly, vulgar, insulting, and badly executed, and I won’t have it on our blog. If you want to see it, visit the original article in Ruhr Nachrichten.

What’s telling about this incident is that the artist — who under normal circumstances would never agree to the removal of one his paintings for any reason, no matter who complained or who was offended — buckled so easily when confronted with an argument based on multiculture. Lefty artists are usually so adamant about Speaking Truth to Power, so fiercely protective of their Right to Transgress, so insistent that Art Must Push the Envelope. Épater le bourgeois!

But not this time. Not when the culture-enrichers are calling the shots.

This is additional proof — as if we needed any — that Islam always trumps other lefty issues, every single one.

The reason why the painter Franz Ott removed this picture

DORTMUND The painter Franz Ott faced a difficult decision on Wednesday: As he was putting up his exhibition in the Foyer of the ‘Foreign Subsidiary Group’, his assistant Martina Plum appropriated from the group suggested that a certain painting should not be exhibited — in deference of the cultural feelings of some visitors.

100 to 140 unaccompanied minor refugees visit the Foreign Subsidiary Group building daily to learn German. They are aged 15 to 18 and are traumatized. 97% of the minors come from Arab countries; most of them are male.

On Tuesday, Franz Ott started to put together the exhibition with the title “Encounters”, which opened on Thursday. He hung nineteen paintings, one of which is titled “Slavery is past”.

Shortly thereafter employees who work at the foyer’s information desk and run the café filed complaints with Martina Plum: some of the male youths were reacting in an extreme fashion to the painting. They posed in front of the painting and amid loud hooting and hollering, they made vulgar gestures and imitated sexual activity with the painted woman.

Some of the other young Arabs reacted differently, but in no less an extreme manner: they stormed to their German teachers and indignantly demanded the painting be removed: that it was not right to show a woman in such a derogatory way. Plum called Ott: it would be better to remove the painting.

Freedom of Art in Danger?

Franz Ott, as any painter would, at first saw freedom of expression in his art endangered, and he was fuming. But he calmed himself down and discussed the issue with Martina Plum.

What spoke in favor of showing the painting: Art can not be censored. It has to be allowed to be uncomfortable. Freedom of expression in art is continuously endangered, and consequently it has to be defended by artists. Also, it was not Ott’s intention to degrade women in his painting, but it was criticism of the fact that many women still are not treated equally.

What spoke against showing the painting: It is easy to say, Whoever comes here has to adjust. easy and unrealistic. Martina Plum knows a lot of refugee stories: “They have experienced things that are inconceivable to us.” Many of the young men were dispatched by their families because they were the oldest or the strongest son. They were attacked and robbed on their flight, they were fleeced by smugglers. Plum says they were all traumatized long before they ever left their home countries.

Girls who are learning German in the building are mostly from Africa, many from Guinea. They have experienced even worse things in the past: They often flee all alone of their own accord, either out of fear of genital mutilation or because they fled from forced marriages.

The Soul is Gone

Many had to sell their bodies in order to survive their escape. “They were,” says Plum, “handed around from ship to ship. When they got pregnant, they were thrown off at the next port. If they were lucky it was a port in Europe.” Some of them eventually arrived, with a baby in their belly from a stranger. “When I look into their eyes: The soul is gone,” says Plum.

Franz Ott knew that. That’s why he didn’t choose any of his paintings with distinctly obvious war scenes for this exhibition.

The painting with the woman, he thought, was okay, because it didn’t show a scene of war and because it says something crucial about our Western society. “I thought that they should see that not everything is wonderful and happy here.” Plum says. Many refugees think that here a person gets rich and happy quickly. One could say, Ott wanted to enlighten with this painting.

Discussion Day with Students and Artist

This is the decision: Martina Plum and Franz Ott agreed to remove the painting. Because the Foyer of the building is not a museum, in which only art is important. And because Franz Ott’s paintings can have an uncomfortable effect, it’s unnecessary to make existing traumas any worse.

The painting had to come down because it’s a ridiculous racist stupid America-hating moronic immature dumb waste of space.