This is the fifth day of our quarterly bleg, and it’s been a hectic week so far. Fortunately, our supply of coffee is holding out!

Begging for money from our readers is a time-consuming job, and has to somehow be layered on top of all the other quotidian tasks. By the end of the day (usually about 3am) I’m beat.

Dymphna and I divide up the labor here at Gates of Vienna, and fundraising week is no exception. We traditionally alternate the writing of bleg posts — I usually take the odd-numbered days, and she takes the evens. I handle all the processing and record-keeping, with the help of the Auxiliary Brain — that is, this computer with its custom-written software. Before her health deteriorated, Dymphna used to write most of the thank-you notes, but I’ve taken on more of those in recent years. Even so, she still writes regular lengthy emails to some of our donors. Communication is one of her best skills.

We’ve always split up the blogging tasks, each according to his or her skills and proclivities. Early in the history of our blog we started to specialize in the topics chosen for our posts: I became interested in the Islamization of Europe, and began covering European issues extensively, while Dymphna focused on American politics and culture.

We continued the division of labor even after her fibromyalgia began to worsen a few years ago. For example, she’s very good at Twitter, and I’m not, so she does most of the Gates of Vienna tweets. I also assign her the reading of small-print documents (including both printed texts and fixed-font files such as PDFs), given how bad my eyesight is these days. Arranging for translations and coordinating with translators is almost entirely my job. Keeping up with Refugee Resettlement Watch is mostly hers.

It’s the same in our household. Despite her precarious health, Dymphna still cooks. Which is fortunate, since she is an exceptionally skilled cook, and I would probably poison both of us if the job were left to me. For her part, she says she will never change a flat tire — it’s a matter of honor. 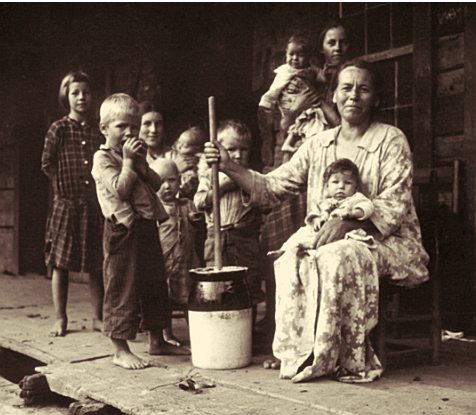 Such is the division of labor between husband and wife in their shared home. Which brings us back to this week’s fundraising theme: “Home”.

Left to their own devices, a husband and wife will arrange the division of labor in their home according to their aptitudes and inclinations. If ideology does not interfere, the tasks will tend to be allotted according to sex stereotypes — and there are good reasons for such stereotypes; they are based on biological differences between men and women that have formed through millennia of evolutionary adaptations.

This doesn’t mean that everyone will always fall into such patterns. I once knew a husband who did all the vacuuming, not because some feminist told him he should, but because he was better at it than his wife. In another household of my acquaintance, the wife had a knack for fixing plumbing problems. Once again, this was without any interference from feminist ideology.

By and large, however, people in the oikos tend to fall into traditional roles, and if their actions are uncoerced, they and the household are the better for it.

The same process extends beyond the home to larger groups that humans instinctively form — the extended family, the village, the clan, the tribe, the nation. Each is a larger and more generalized version of home, with characteristics that are intuitively understood to be home-like (the root sense of the word “homely”) to those individuals who share that identity. Provided, that is, no pernicious ideologies interfere to impose alien notions of what the larger home should mean to everyone in it.

In other words, the extended home is something very different from the “Common European Home” proposed by Mikhail Gorbachev back in the 1980s. Absent ideological coercion, people will build a common homeland organically over time. It is a place with a shared language, culture, and customs. Its inhabitants have an intuitive sense of who they are and what they belong to.

For more than a century it has been the self-appointed task of Progressive ideologues to deconstruct this natural human home at all levels, from the dwelling where a husband and wife raise their children through the common spaces of villages and towns to the nation-state itself. All must be broken down! Marriage must be destroyed! Child-rearing must be managed by the state! Any national identity is evidence of racism! No more national borders!

To these gutmenschen, the concept of “homeland” is atavistic and oppressive. Every human community must be inclusive of everyone, no matter their race, creed, culture, or language. Diversity must triumph!

The United States may be trailing Europe in these matters, but it is still traveling rapidly along the same route.

The Department of Homeland Security does not have anything to do with a homeland, and does not increase security. It was created to add new layers of sclerotic bureaucracy to an already massively engorged behemoth, and to further control a cowed and compliant populace. No one feels any safer, but everyone knows he must do whatever the man with the blue gloves tells him, or face thoroughly unpleasant consequences.

Such is the 21st century. There is no longer any real homeland here or anywhere else in the European diaspora (with the exception of parts of the former East Bloc). If those of us who try to resist want to make real homes for ourselves, we must reclaim our homelands.

A homeland is one’s heartland. My heartland is Virginia, or at least the parts of it that still remain essentially Virginian.

I lived in cold, soggy Yorkshire for four long years of my youth, and despite the fact that I learned to love the place, my heartland remained somewhere else. The place I pined for lay between the Blue Ridge and Tidewater. It had freezing winters and steaming summers and fireflies and red clay back roads and a Piedmont drawl and morning glories in the hedgerows. A place where people say “y’all”. And “I reckon.” And “Yes, ma’am.” And “It’s a right good ways from here.”

This is my home. It’s where I was born, and I’m grateful to be here.

We owe a debt of gratitude to all of you.

14 thoughts on “Homeland and Heartland”