As the “migration crisis” continues to escalate, Hungarian Prime Minister Viktor Orbán has become the most prominent anti-immigration activist among European elected officials. In recognition of his new celebrity status, Vlad Tepes commissioned the following graphic, to poke a little fun at the hagiography surrounding Ernesto “Che” Guevara whilst pushing back against multicultural madness in Europe: 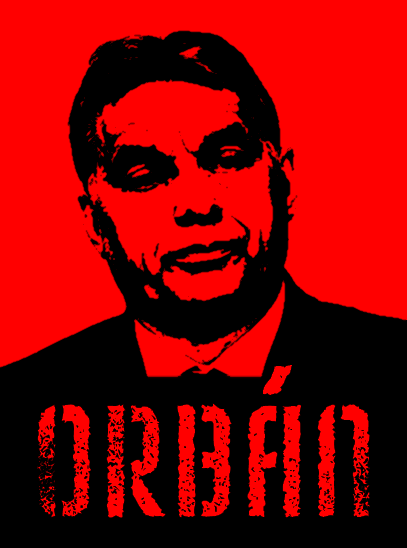 A pop icon for our time!

On Wednesday Mr. Orbán answered questions at a press conference while he was in Brussels. A photo of a dead migrant toddler on the beach in Turkey was fresh in reporters’ minds, so their questions bristled with antagonism towards the Hungarian premier. How could he be so cruel and heartless as to put up a border fence? And register the immigrants before allowing them to proceed to Germany? Following EU regulations — unheard of! How could he?

Actually, what Mr. Orbán is doing here is a political version of “work-to-rule”. He is insisting on going through all the red tape prescribed for the Schengen Area, instead of ignoring it like all the gutmenschen want him to do. And he’s sticking to his mantra: Secure the border FIRST.

A blogger from the Hungarian Counterjihad site Dzsihádfigyelő sent the following email with some illuminating statistics about Hungarian public opinion on immigration:

The graph shows a Hungarian opinion poll (taken by Republicon Institute) about refugees: 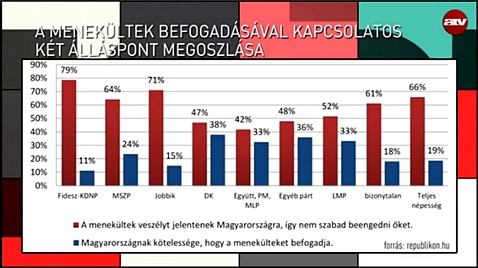 Red: Refugees pose a danger to Hungary, so we must not allow them in the country.
Blue: Hungary is supposed/bound to accept/take in the refugees.

Fidesz-KDNP is the ruling party, the party of PM Orbán. Jobbik is the far-right party (second biggest party). They both oppose immigration. What is very interesting is that all the left-wing parties (MSZP [third biggest party, 64%! against migrants], DK, Együtt, LMP) fanatically support immigration against the wishes of their voters.

Altogether, 66% of the total population think that the refugees pose a threat to Hungary.