In the following interview, a German scholar of Islam makes the case for a possible internal liberalization of Islam, in effect an Islamic “Reformation”.

If Abdel-Hakim Ourghi is not engaging in taqiyya, he must be touchingly naïve. In order to undergo a “Reformation”, Islam would have to return to its original principles, as laid down in its core scriptures. And we all know what that would mean. Why does he not know it at least as well as you and I do?

Many thanks to JLH for this translation from Politically Incorrect:

Criticism of Islam Must Belong to Islam 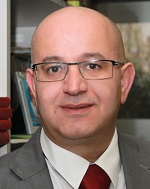 At the opening of the Third Cologne Festival of Philosophy, the Islam scholar Abdel-Hakim Ourghi will speak on the topic: “What did Mohammed want?” Ourghi is the head of the department for Islamic Theology and Religious Pedagogy at the Pedagogical High School of Freiburg. His areas of concentration are Koran research, Sunni fatwas, the Ibadi movement[1] in North Africa, and Islamic theology. Since 2009 he has been working on a habilitation[2] project with the working title, “The Dialogue between God and the Devil. A de-mythologizing hermeneutic.” The native Algerian is considered one of the leading Koran experts.

Tomorrow at 9 PM, Lamya Kador and Eberhard Schockenhoff will discuss “Dying for Allah. Dying for God,” moderated by Joachim Frank.

The interview with Ourghi, conducted by the General-Anzeiger Bonn follows:

Mr. Ourghi, did Mohammed want his followers to behead infidels and burn them in cages in front of running cameras?

The people you are talking about are a minority of extremists or Salafists who should not cause all Muslims to be viewed with suspicion.

He can be understood, in one sense, as the proclaimer of a religion — applying to the time from 610 to 622. After he moved from Mecca to Medina, we are dealing with a statesman, who repeatedly used force against unbelievers, Jews and Christians. It falls to Muslims to no longer mask these violent aspects. That includes seeing certain Koran verses as out-of-date.

Christianity also had its phases of intolerance, before it passed through the filter of the Enlightenment. Is Islam lacking this relativization?

Islam is lagging behind when it comes to a modern Renaissance and an Enlightenment that empowers criticism. The core of the Western Enlightenment — individual freedom — has been impounded for centuries by conservative scholars and political depots.

The Catholic Church has a Pope and councils. Is Islam lacking such authoritative agencies?

This pluralism is no disadvantage, just the opposite. We have only canonical sources, the Koran and the tradition of the Prophet, which is also controversial. There have been attempts at reform in Islam from the 8th century to the present — for which the reformers often paid with their lives. A reform in the European context requires a historical-critical reading of these sources, to scrutinize Islam’s claim to domination and revive its ethical-humanistic strength.

The previous and the present federal president have both declared that Islam belongs to Germany. What do you think of that?

Such brave words are a balm on the soul of Muslims who live here. Of course Islam has belonged in Europe since the seventh century in Spain. But an Islam without criticism of Islam does not belong in Germany, and an Islam as an ideology of power is doomed to failure in Europe.

What would have to change to make Islam compatible with Western democracies?

First, the freedom of the individual as the greatest good must be enshrined in Islam. Constructive criticism of religion must not be perceived as insult, so that Muslims no longer slip into the role of victims. And insistence on the claim of the universal truth of Islam signifies intolerance of other religions and of non-believers.

But there are countries where Islam is the state religion and used by the ruling powers as an instrument of dominance. The prospects for reform there are dismal…

In this case, we are talking about Saudi Arabia and the Gulf states. We are dealing with a double standard: “Cruel Islam” and sharia apply to the poor population, but the rulers do not behave Islamically. In Germany, where Muslims are a minority, that is fundamentally different. Here, dialogue can build bridges to other religions.

Who should be having those discussions here in Germany?

I am critical of the Muslim umbrella organizations in Germany, which, like DITIB, are guided by state agencies from the countries of origin. We need a council of Muslims which accepts representatives of all types, and that began with the Muslim Forum of Germany.[3]

How optimistic are you about the necessary reform?

It can succeed if Islam no longer sees itself as a militant community, striving for mastery over the whole world. Second, Islam must be seen as an individual, spiritual connection between person and God. It is religious ethics with spiritual values.

29 thoughts on “Criticism of Islam Must Belong to Islam”