We’ve talked about Refugee Resettlement Watch a number of times. Sometimes I forget it really is a “watch” website. That is, RRW is dedicated to following the State Department and its various religious charity providers as they do random dumps of 3rd world people around the country.

Tonight Andrea Shea King is going to talk about that infamous State Department program, “Refugee Resettlement”, and the enabling religious organizations who make money from their participation. Are these bureaucracies “non-profits”? Sure, and you can bet their under-the-radar work enables them to stay alive – which eventually becomes the goal of every bureaucracy. Think of these professional aiders and abettors as our American capos.

Who in their right mind would deliberately destroy a town and then walk away? 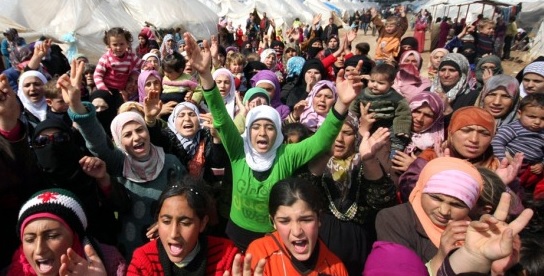 In her heads-up email notification about her radio show tonight, Andrea says:

Are they in your Community? Neighborhood? State? Who are they?

“They” are mostly Muslim Middle East and African refugees…

Tonight we’ll talk with Christina Jeffrey about the involvement of communities — like Spartanburg, NC — in the Refugee Resettlement Program. Dr. Jeffrey has been shining light into the darkest corners of this insidiously secretive plan to undermine and collapse our communities by bringing in these illegals, most of whom are Muslim.

These refugees are called “seedlings” who are brought here to be planted into US “soil” with the intention of reproducing and eventually taking over the communities in which they are “planted”, further weakening the fabric and culture of our American society. They are not encouraged to assimilate, and they are immediately placed on the government dole, “compliments of American taxpayers.

Here is the program, which begins at 9:00 p.m. Eastern Time. It will be archived on the site as “The Andrea Shea King Show w/ Dr. Christina Jeffrey”, so you can listen later at your convenience.

Meanwhile, other sites are carrying aspects of this story about South Carolina:

Rep. Trey Gowdy, R-S.C., has received a response to his letter demanding answers from Secretary of State John Kerry about the planned resettlement of dozens of foreign refugees in his state.

But the answers failed to shed much light on the secrecy that surrounds the refugee program. The process by which cities and towns across the U.S. are selected to receive displaced persons from United Nations refugee camps remains largely a mystery.

As Gowdy discovered, the city of Spartanburg, South Carolina, was approved for an infusion of 60 refugees, mostly from Syria and Africa, by its own state government headed by Republican Gov. Nikki Haley.

It appears from reading the story that the State Dept holds meetings in a given city before sending them their allotment of refugees. These meetings aren’t open to the press or to the public but, hey, they held them. It even turns out that the Congressman’s aide attended but failed to report back to the boss. And now Gowdy isn’t taking phone calls on the matter. So ready or not, Spartansburg is going to have its fair share of Syrian Muslims.

if the program plays out in Spartanburg as it has in communities in Minnesota, California, Texas, Ohio, Illinois, North Carolina, Georgia, Florida and other states, then the 60 refugees will blossom into hundreds and eventually thousands every year. Minnesota, for example, is now receiving more than 2,000 Muslim refugees annually, mostly from Somalia. Texas receives more than 7,000 per year, and California more than 6,000

The report follows with a list of states and the numbers they took in during 2014. However, that list is woefully inadequate since it doesn’t give us the real scope of the problem because not all states are listed. Oh, wait: the list is from the State Department website. Never mind; I’m sure it’s accurate. Our government is bound by the law to keep accurate account of its doings…but then this administration feels freer from the bonds than most do. Eyes on the prize: the fundamental transformation of every nook and cranny.

Here’s one that didn’t get mentioned at all: New Hampshire. Five years ago Manchester begged for a break. And you have to ask, where was theirCongressman?

This city has long been a resettlement site for refugees, sent here by the State Department for a chance at a better life. More than 60 languages are spoken in the school system, with Somalis, Sudanese, Iraqis and other recent arrivals mixing with children whose ancestors came from Quebec to work in the mighty textile mills along the Merrimack River.

But this year, after decades of taking in refugees, Manchester said, “Enough.”

In a highly unusual move, Mayor Ted Gatsas and the city’s Board of Aldermen asked the State Department in July to halt resettlements here for now. A tide of more than 2,100 refugees over the last decade — most recently, Bhutanese families coming from camps in Nepal — has been more than the city of 109,500 can assure jobs and decent housing for, Mr. Gatsas said.

We think of our State Department as concerned with foreign affairs but increasingly under Obama it would appear their job description is mainly driven by his mission to burden America in a time of growing economic distress. It seems the less we can afford it, the more they pile it on.

These are alarming statistics, disturbing enough to make you wonder if all the turmoil on the southern border, given its deliberate nature, is merely intended as a distraction from this larger reality:

The U.S. takes in more refugees than any other country, about 70,000 per year, and has absorbed 3 million since 1975. But since the early 1990s, the trend has been to accept more from Muslim countries.

Obama has hung out the “Christians Need Not Apply” sign.

Some residents of Spartanburg are upset and asking questions, not only about the security risks associated with importing refugees from a Middle East war zone but also about the numbers of refugees that will eventually end up in their county and how much it will cost to absorb them into schools, housing and health-care facilities.

So, is Obama’s “foreign” policy really a domestic strategy designed to bring in hundreds of thousands of MENA Muslims? Because most of these immigrants now are Muslims from countries that Obama destroyed. Was the destruction deliberate, in aid of his burning desire to “fundamentally transform” America?

In 2010, an essay on Fremont California’s Afghan community appeared in City Journal

the first thing that a tourist might notice is that Fremont—along with other cities in this county just south of San Francisco Bay—now hosts enormous Indian, Pakistani, Vietnamese, and Chinese populations, as well as smaller clusters of a dozen other nationalities. In fact, this city of 217,000 is among the nation’s most ethnically and culturally diverse. Some 136 languages are spoken at home by children who attend Fremont schools, according to the San Francisco Chronicle, and white, native-born Americans constitute only 38 percent of the city’s residents.

One of Fremont’s most surprising and least accessible ethnic enclaves is its Afghan population, probably the largest in the Western world. To outsiders, the Afghans of Fremont seem to be a tight-knit community, faring relatively well in a new and very different place. But those who know them well see a more troubling picture. Though some Bay Area Afghans are enormously successful and have integrated fully into American life, many are not assimilating. Far too many exist in a state of suspended animation between Afghanistan and America—anxious, uprooted, belonging totally to neither culture, intensely competitive with one another but even more suspicious of outsiders. Among those concerned: local police and the Federal Bureau of Investigation, which have quietly intensified their scrutiny of the area’s Afghan community, worried about possible ties with Islamic terrorism.

Why all the better to bring America’s house down, if that is your intention.

And they keep on a-coming:

Afghans and experts alike complain that this is a severe underestimate. Valerie J. Smith, a communications instructor at nearby California State University–East Bay, puts the number of Afghan refugees in northern California at 30,000, not counting their native-born children. [don’t forget – that’s a 2010 estimate]

For refugees they are—from a country ravaged by a decade-long war against the Soviets in the 1980s, another decade of internecine warfare in the 1990s among rival Afghan ethnic groups, the oppression of the militant Taliban, and now an American war. In fact, since 1981, Afghans have been the world’s single largest refugee population each year, accounting for at least a quarter of all refugees. “At the height of the Rwanda crisis in 1994, there were 2.3 million Rwandan refugees and 2.7 million Afghans,” says Jeremy Hein, a sociology professor at the University of Wisconsin–Eau Claire. “When the Bosnia refugee crisis erupted in 1996, there were 893,000 Bosnian refugees but 2.7 million Afghans. In 2009, 1.9 million Iraqis were forced to leave their country, but there were still 2.8 million new Afghan refugees.”

The refugees arrived in the U.S. in two main waves, Smith says: a post-Soviet-invasion influx from 1989 to 1993 of more highly educated Afghans, many of whom held senior government posts and professional jobs in Kabul; and a second, smaller wave from the late 1990s until now, which has included large numbers of Afghans from rural areas with little or no formal education, particularly widows and others classified by American immigration authorities as “women at risk.” While the Afghans have assimilated into America faster than immigrants from, say, Mexico and El Salvador, says Jacob Vigdor, an economics and public policy professor at Duke University, their assimilation rates lag far behind those of immigrants from such Asian countries as South Korea, Vietnam, and the Philippines.

Well, duh. South Korea and the Philippines aren’t third world hell holes. And Vietnam is fast catching up after decades of lagging behind other Asian places. Few of them are Muslims, but as we can see Obama is actively working on that part of his equation of destruction by Islamic diversity. Our president allows darned little “diversity” in his own life, but he’s decided we’ll pay for whatever “colonial” grudges his putative father held against England and the U.S.

Meanwhile, back at the ranch Refugee Resettlement Watch has some questions for Mr. Gowdy himself:

Rep. Trey Gowdy says he has no role in the resettlement process occurring in his district:

“…. our office does not have a role under the law in the implementation of such a [resettlement] plan….”

He, above all other Members of Congress, does have a role when it comes to who is resettled in American towns and from where they hail!

Gowdy has taken a good first step, but he can do much much more as he sits in the ‘catbird seat’ as chairman of the subcommittee responsible for overseeing the entire Refugee Admissions Program

Gowdy is chairman of the House Judiciary Subcommittee on Immigration and Border Security and he could hold oversight hearings tomorrow and help other struggling towns by helping concerned citizens get answers as to how and why the secrecy surrounding resettlement plans for the last 35 years.

And, indeed, he and all members of his Judiciary Committee and those on the Senate Judiciary Committee have the opportunity (requirement!) UNDER THE LAW to review the Presidential Determination Letter and supporting documents that are submitted to Congress every September by the White House/US State Department.

She has links to the Blue Ridge Forum’s discussion of the Judiciary Committee and to an essay by Daniel Greenfield.

Is this subject reaching critical mass yet?

23 thoughts on “Refugees Come In Under the Radar”