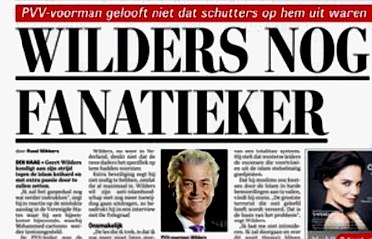 When he arrived home last week after being in Texas during the terror attack, the PVV leader Geert Wilders told the Dutch media that the events in Garland had made him even more determined to continue his push against Islamization.

Many thanks to Wachteres and Henk V for translating this article from De Telegraaf:

PVV leader does not believe that gunmen were after him

THE HAGUE — Geert Wilders has announced he will continue his struggle against Islam rigorously and with extra passion. “I will push the pedal a little further down,” he says in response to the failed attack in the United States, where he was in attendance at a meeting where Mohammed cartoons were exhibited.

The PVV leader was the main speaker in Garland, and had left the building just before the two gunmen tried to enter. They were shot dead by police.

Wilders, now back in the Netherlands, does not think the two perpetrators were after him in the first place.

He does not need extra security, he says, because it is already optimal. Wilders wants to propagate his anti-Islam message with more dedication, as he emphasized in an interview with De Telegraaf.

“The conclusion I draw is that I have to make clear what I stand for even more: freedom of speech. You may disagree with me, consider it tasteless. But it should be out of the question that people are met with violence.”

Wilders makes a comparison between the Koran and Hitler’s Mein Kampf: in his opinion both books describe totalitarian systems. He states that Western leaders systematically condone the excesses that arise from Islam.

That he might hurt the feelings of Muslims by attacking Islam in harsh terms is incorrect, he says. “The biggest terrorist who ever lived is being worshipped. That is the core of the problem,” said Wilders.

“I will not be intimidated. I’ll go forward and keep talking about these issues. I also think that in response to what happened, we ought to show Mohammed cartoons everywhere.”